The update shuffled around ways for obtaining most desired resources like

Shadow Caches. Read here how to get them! 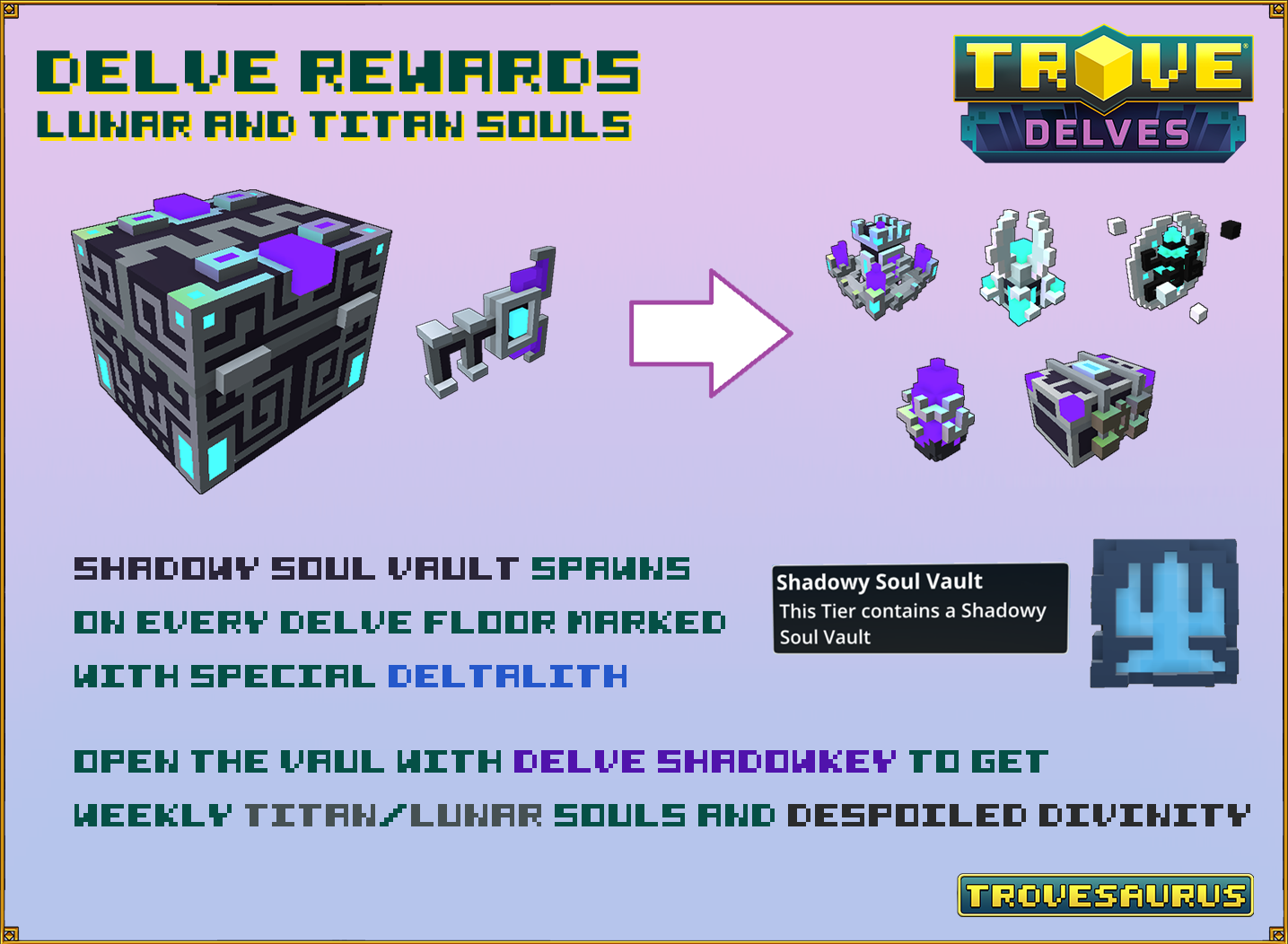 With this update all rewards previously obtained from Shadow Tower have been moved to Delves. Every third consecutive floor after portal opening and further contains Shadowy Vault, each of such delves contains 'Shadowy Soul Vault' deltalith in the start of a delve floor.

You need to use

Delve Shadowkey to open these Vaults.

Despoiled Divinity. Patron Pass or Daily bonus do not affect these gains.

Shadow Caches. Their amount depends on the depth of the Delve where the vault was open.

All following Shadowy Soul Vaults after first 6 opened per week will continue granting Glim, Shadow Caches and Gear. Rank of the obtained Gear depends on the depth of the Delve.

To sum it up, from Shadowy Vault opened with

Delve Shadowkey you can get: 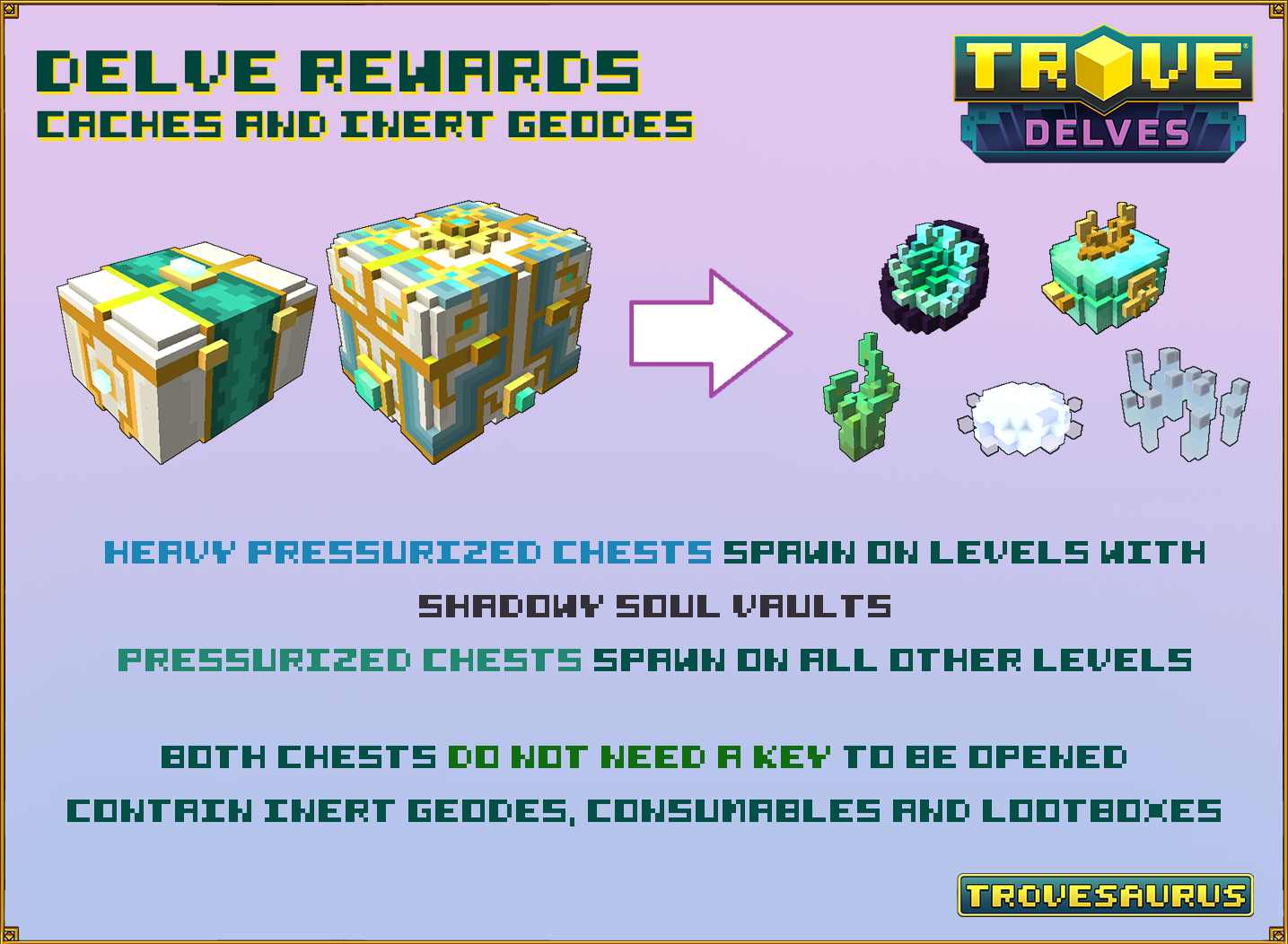 After a Delve floor is completed and Boss is slain a chest (or two!) spawns. Pressurized Chests spawn on every fist' and second' delve floors, Heavy Pressurized Chest spawns on every 3rd floor, together with Shadowy Soul Vault. These two pressurized chests do not require a key to be opened, but there is minimum Power Rank depending on the depth of delve to obtain loot from them.

In these chests players can always find some

Inert Geodes – special Delve Currency, some gear and rarely – monster, boss and biome mementos. Heavy Pressurized Chests contain more Pressure-locked Delver's Caches and more Inert Geodes. Chance for Mementos is same from both chests. Banner of the Geodeseeker does not have effect on Inert Geodes found in chests.

New mounts from Shadow Tower bosses drop from these chests on floors with corresponding bosses. For example,

Prophet's Throne only has a chance to drop from Delve floors with Weeping Prophet boss.

Every chest as well as all the mobs in delves have a chance to drop banner parts – standards and banner poles. From those, you can craft banners that grant stat boost and can be loot collected for banner styles. Read more about banners here.

Update: Deep Dragons update introduced a unique banner style for each of Delve bosses. Obtain recipe in Delves and craft the banners at Delve Workbench. Read more about those banners here.

Mysterious Trophy Case can drop, these contain all available trophies from all the monsters and bosses.

Even more rarely, these chests can contain

Starfire Dragon Egg Fragments. Some Delve biomes have a chance to drop other dragon egg fragments such as

Together will all the things from above, Pressurized and Heavy Pressurized chests drop Delve food which is also used as currency and crafting material.

Freerange Electrolytic Crystals drop depending on the depth. Luckily, you can convert each of these currencies into others by trading with Delve NPC merchants.

All drops from Pressurized and Heavy Pressurized chests are not limited per week or any other time frame. The more delves you complete - more you get. However, there is a limit on how many

Inert Geodes can be in the inventory at a time.

Read more about Inert Geodes and other Delve currencies here.

Special boss-portals and their loot ⏷

Update: The Deep Dragons update introduced 28 more portals for each Delve boss there is. This made it much easier to hunt down bosses for their mounts, banners and mementos. Read more about them here.

There are three special Delve bosses that have their own personal tradable portals:

Flakbeard  that can be found in

Delve Gateway: Flakbeard (Private 128)
Shadow Hydrakkern that can be found in

Delve Gateway: Shadow Hydrakken (Private 128)
Refracted Balephantom that can be found in

All those portals are tradable and can be purchased from the in-game marketplace.

Each of those bosses has unique loot that you can not obtain from other delves:

Every monster in Delves has a chance to drop some

Inert Geodes, that chance is increased if player has

Banner of the Geodeseeker equipped.

On top of that, every monster has a chance to drop

Binding Darkness – special resource that is used for crafting

Same monsters can rarely drop banner parts – same parts as you would get from Pressurized and Heavy Pressurized chests.

Some groups of delve monsters can drop dragon egg fragments. Bee–like monsters for example can drop

To sum it up, from killing monsters in delves you can get:

All drops from monsters are not limited per week or any other time frame. The more delves you complete - more you get. However, there is a limit on how many

Inert Geodes can be in the inventory at a time.

While passing through Delve caverns players can pick up various plants and ores that otherwise can only be found in Geode Caves. Geodian module Omni-Tool from Discovery suit layout is required to mine those ores, some even require higher tier upgraded Omni-tool.

Picking up those plants works for 'Collect Organics' daily adventure, and within ores in Delve caverns you can find

Cinnabar ore, and all mobs in it have a small chance to drop

Aside from those, every Delve cavern is full with Crystals and Shadow Crystals. Picking up crystals grants untradable

Vaca-Matic module can be used to suck up such crystals and plants, but it will not work for ores.

To sum it up, while travelling through any Delve cavern you can find:

Crystallogy Workbench and used for crafting decorations at

drops from delve caverns are not limited per week or any other time frame. The more delves you complete - more you get. However, keep an eye on the timer - if you go collecting all ores instead of completing Delve Objective you will not be able to proceed to next depth.

From Delve Daily Adventures, from NPC merchants in Delves, from boss chests in Delves and rarely from donating

Delve Workbench you can obtain

Fortress Heirloom Capsule can be purchased at random from rescued pebble and boulder merchants. Each of capsules contains banner standards that can only be combined with banner pole that is stated on the capsule.