Powerful modifiers that have high impact on every Delve! 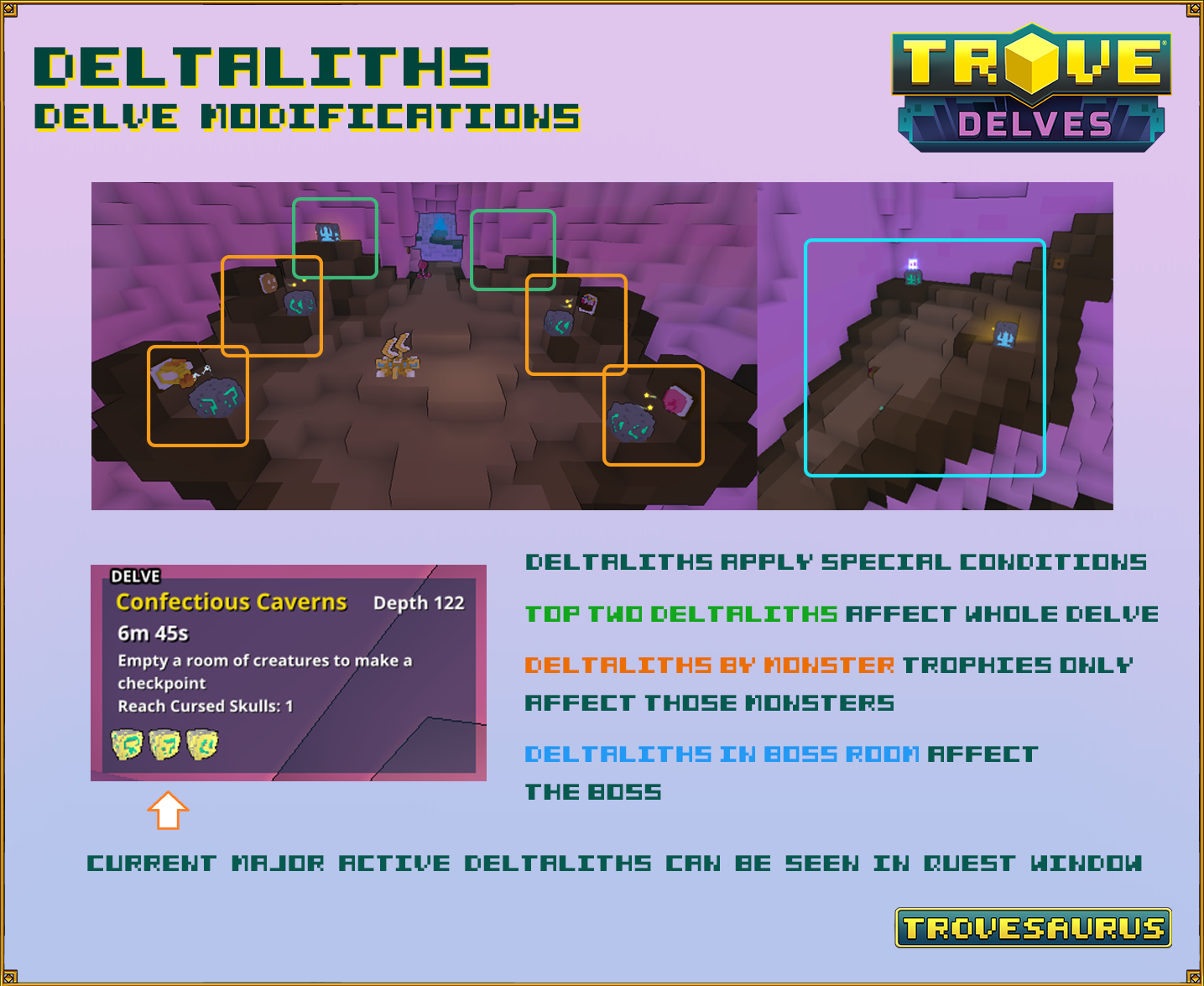 In the entrance room of every Delve and in the boss rooms players can find various Deltaliths – modifications that not only affect player's and monster's stats but also add unique abilities to monsters and even modify laws of Trove nature!

There can be up to 8 Deltaliths at the start of a Delve and up to 6 in the Boss room. Players can see them as objects on the ground and can view their tooltips with names and effects.

Note: There can be more buffs and debuffs applied than is shown at the entrance only the most important ones are.

Deltaliths differ in their area of effect. Some have an effect during entire Delve from start to Boss included, some affect path till the Boss, some only apply to monsters or only to the boss. On top of that, some mutators only appear in a certain type of Delves (Public, Private or Challenge) and/or at a certain depth.

Deltaliths can have Ranks which signify the power of their effect.

Each Deltalith has a unique combination of decoration block + visual effect.

1 maxTier Deltaliths
Affects the entire Delve Tier, from starting room all the way through the entire boss fight.
Either side of the exit from the starting room, also appears in the lair.

Entropy (I to III) - Reduces Jump

Lifting of the Veil - Trovians are no longer protected from being killed by a single enemy attack, and Death Defying Vials no longer automatically trigger

The Deep I - Jump reduced to 0
blueprint: 2020/delves/deltaliths/black_number_00

1 maxPath Deltaliths
Affects the Delve until the objectives have been completed, which spawns the Cursed Skulls.
Either side of the exit from the starting room.

Curse of Water - When slain, enemies have a chance of refilling a single flask charge for all players within 3 Blocks

3 maxCreature Deltaliths
Affects all creatures of a given type.
Beneath and in front of a given creature's Trophy in the starting room.

Agile - Some enemies have increased Movement Speed and Damage

Antumbral - Some enemies have reduced Darkness

Gladiator - Some enemies have increased Health, Damage, and Stability

Tenebrous (I to III) - Some enemies have increased Darkness stat

Tenebrous I - Some enemies have increased Darkness stat
blueprint: 2020/delves/deltaliths/skyblue_number_01

Lair Deltaliths
Affects the boss fight.
Next to the stairs leading down to the Boss's fight room.

Furious - Grows stronger when reduced below a certain health threshold

Hardened (I to V) - Takes reduced damage from players

Hardened I - Takes reduced damage from players (by 15%)
blueprint: 2020/delves/deltaliths/skyblue_number_01

Sit Down - Occasionally forces airborne players to the ground

The Floor is Lava I - Occasionally turns the ground around Trovians into Lava
blueprint: 2020/delves/deltaliths/orange_symbol_02

The Floor is Lava II - Occasionally turns the ground around Trovians into Lava
blueprint: 2020/delves/deltaliths/orange_symbol_02

Vulnerable (I to III) - Takes additional damage from players