Get ready to fight the forces of shadow in previously undiscovered lands and with a brand-new Expert Class – the Vanguardian! Trove – Heroes arrives this Spring! 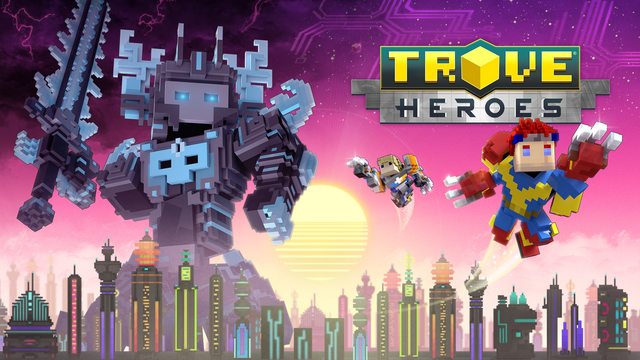 Get ready to fight the forces of shadow in previously undiscovered lands and with a brand-new Expert Class – the Vanguardian! Trove – Heroes arrives this Spring!

The PTS has been opened and updated to contain the testing release of Trove Heroes, jump on to try out the new Vanguardian class, the Luminopolis sub-biome, Rampages, Beacons, Beacon of Heroes and more.

We hope you’ve all had a fantastic 2018 so far! It’s been a boost to the whole team to see all the positive responses to our last update, Trove – Adventures, which introduced a now fan-favorite biome: the Forbidden Spires. That energy’s going into a ton of new content coming up in 2018, the first of which is our brand new Heroes update!

We're collecting images to show all new things in a nice handy post. This post is being updated continuously, check the update log for update info. Warning ahead, this is image heavy ^^.

Luminopolis is a sprawling, technological wonder that’s home to many massive marvels of modernity!

Heroes Preview 3 – Getting Better All the Time

This spring the free Trove – Heroes expansion is going to unleash a powerful new class and beautiful new sub-biome, but it’s also bringing all sorts of improvements to elements of the game that were due for an update.

The Vanguardian is the hero we deserve. Rising up against the forces of shadow she is a stalwart protector of the innocent and a fierce warrior of the light.

Answer the call to action, fight back against the rampaging Amperium, and save the world! Trove – Heroes launches on March 27, 2018!

We've updated the Trovesaurus Database to the Trove - Heroes client update, and detected the following changes to the Collections table.

We've updated the Items and Deco database to the Trove - Heroes update. Sorry for the delay in publishing this, we filtered out a large number of minor text edits that didn't need to be shown.

We've updated the Styles database to the Trove Heroes client, sorry for the delay in publishing, we had to filter out a large number of minor text changes.

Fly into epic new adventures with Trove – Heroes! Powerful, shadowy forces try to corrupt the once peaceful realms of Trove and it’s up to you to stop them.

This month we celebrate the release of Trove - Heroes with an art contest, we are asking you guys to draw your superhero characters or convert Trove characters into a superhero as demonstrated by our Superqubes here drawn by

Thanks for taking part in our Heroes art contest, we have the results from our guest judges