Find out the story behind the planet Geode, and how it relates to the Trove we know. 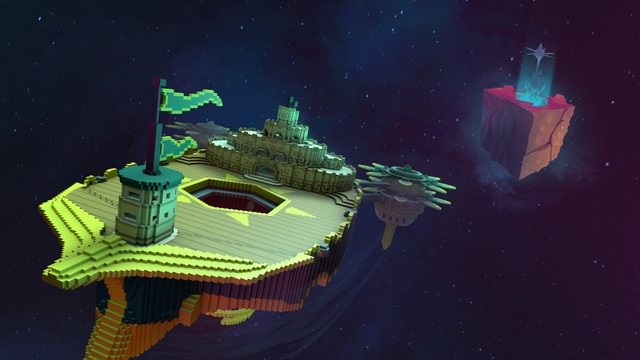 The Builder god is responsible for Geode, which was inhabited at the time by The Ancients.

During Q'bthulhu's attack during the conflict of the gods the Sun Goddess used her power to hide her treasures away. Geode was hidden while the Builder fought the forces of Q'bthulhu elsewhere.

He left his tool, a giant chisel, embedded into the ground and some of his power was given to the ancients who resided there, to take care of Geode while he was gone.

After the Sundering the Sun Goddess' powers waned. She could no longer hide Geode and Q'bthulhu set his sights on the rich resources of the planet, making his commander Undertow responsible for harvesting.

The ancients over time realized they weren't powerful enough to protect Geode and decided to implant themselves into the planet to strengthen the power of the planet. The energy they put into it is why the caves are so plentiful of resources.

More time goes by but it wasn't enough to protect against Undertow and his attacks.

The Pebbles and Boulders are the descendants of these ancient ones. The Boulders, big and powerful with the strength of the Builder and the Pebbles being smaller with more ingenuity and knowledge. As pacifists, they go to the safest place they know of, the chisel, embedded into the surface of the land flowing with power.

They built their last bastion on the chisel using its power to shield it from Undertow. This place became known as Sanctuary, the last safe place on Geode.

A small group of Geodians are called the Sun Seekers. These are trained in the arts of combat and they were able to rally and bring remaining Geodians back to Sanctuary, away from the onslaught of the shadows. They realize their strength alone isn't enough and thus they have assembled to recruit assistance from Trove.

Rowan, one of the sun seekers and a descendant of Trovians inhabiting Geode, travels to Trove via his ship. There he requested the aid of all Trovians. First, we assisted him in building the Solidarity, a massive spaceship enabling us to get to Geode.

The gravity on Geode is different from what Trovians are used to. To strengthen yourself and the Geodians, you will first aid the pebbles and boulders by going into the caves, prepare yourself for the fight on the surface. Then U10 will come later this year where you will enter combat with the shadows on the surface.