Commented on: Ancient Shrine of the Pheonix Dungeon (3 Star) creation

Ancient Shrine of the Pheonix status has been set to Active

Commented on: Ancient Shrine of the Pheonix Dungeon (3 Star) creation

My oh my this is beautiful. Lots of effort and passion must ve went into this dungeon :) Im very fond of overall design, very pretty and on-point.

Layout is great, bosses shifting positions is great, terrain is interesting and well-made and all functional elements seem to be in place too, but lets talk about variety, accessibility and 'elements' count.

You have two very different fire birds and they are just eye candy, but actual boss fight place is absolutely identical. Make one bigger/smaller/lower/higher/other traps/other colors, you know how that works :) Something to make the fight conditions differ.

Absolutely same thing goes for both (all 6) towers. They are well decorated and shifting boss spawners should make it vary (and i absolutely love the squirrel stash) but they all look identical and have same layout/fighting conditions. We should avoid making players question themselves of 'have i already been here? am i going in circles? did i lag all the way back to previous tower?'.

I understand they have to stay identical on the outside, else there wont be such a nice symmetry but on the inside there should be ways to make them look and feel unique.

Another question would be navigation within those two towers. Oddly enough Forbidden Spires spawns starting from the very first world, and unfortunately that is not a bug. Atm im failing to find a way to climb up with 2 jumps, it seems like i need at least 5 to get to higher rooms. Plus, position of hatches one above another makes it possible to fall all the way down by accident, which would be really frustrating with low amount of jumps.

If you were, lets say, flip the middle room and place jump pads below each hatch it would make climbing up much more newcomer-friendly. 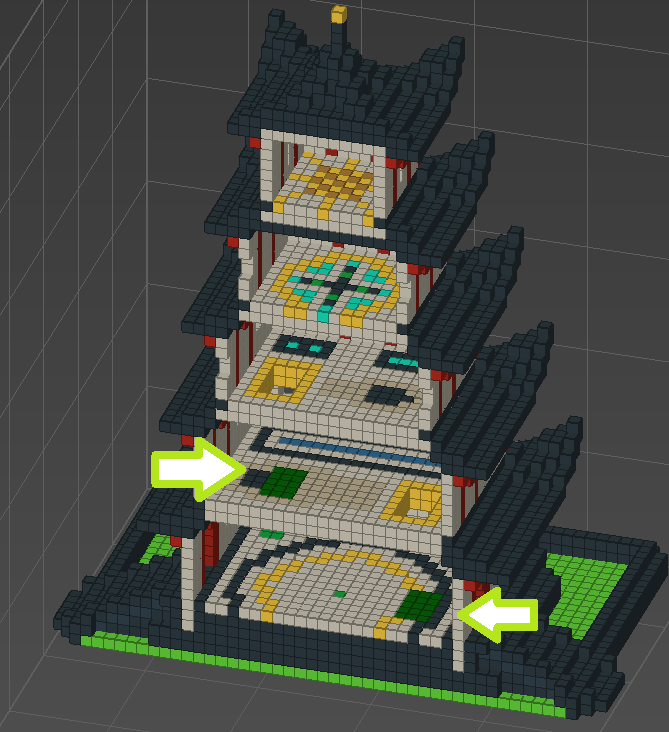 You could also make walls 2-thick and use one tower blueprint as outer shell in which rooms will be plugged in. That way you will have:

All of that can look different as long as they have same entrance/exit points that work for all layouts. But you might need to think through boss/miniboss spawner placements to be sure there are always at least 2 miniboss and 1 big boss spawning options present in a dungeon. For example, if you say your bottom/yellow rooms in both variations have miniboss spawners, you will always have secured positions for miniboss because you have 2 towers and this room will be used twice. 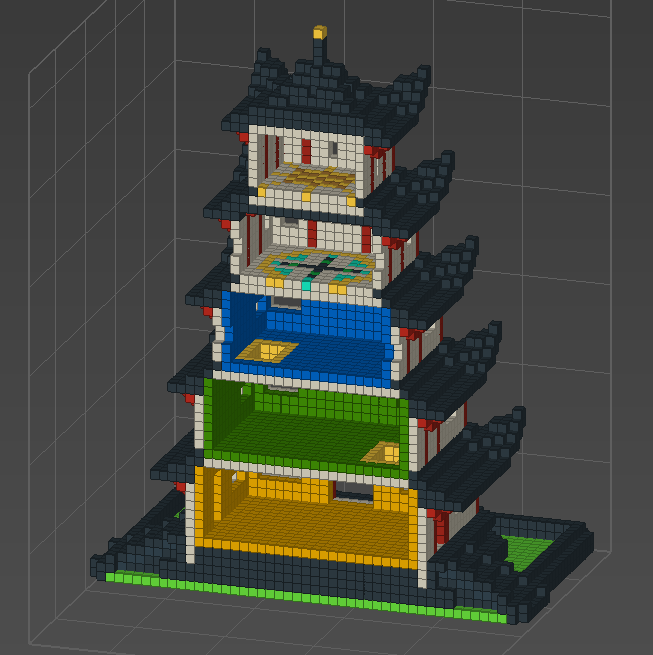 Last but definitely not least. Decorations and traps (and floating/corner connected voxels) highly increase count of elements. You can see that one in metaforge if you type /debugtext. Currently your dungeon for the most part is in the Red zone. 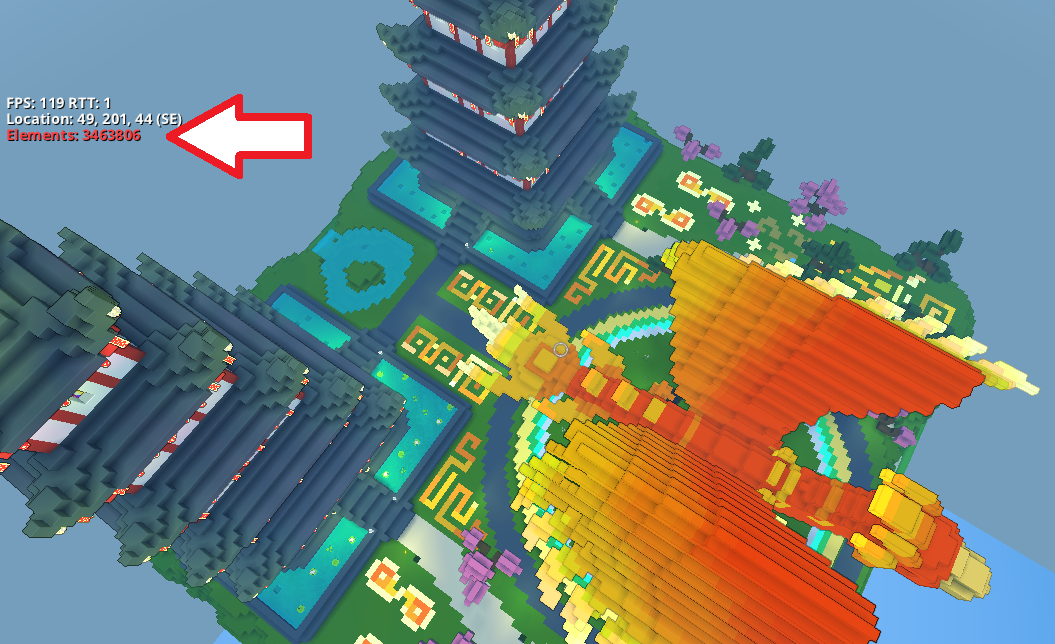 Red is a high count which means that something has too many elements and so it will take more resources to display/generate such a dungeon for player = longer it will take = more lag are we likely to experience in worlds. It pains me to say this, but please do trim down amount of decorations.

Occasional red spikes could be fine, as long as from majority of angles (read - walkthrogh path) it shows orange/green.

Im going to change status of this dungeon to Active for now. Hoping to see it on review again!

Crystallance status has been set to Active

Hmm, i believe i just approved a more interesting version of same spear :) Also, you shouldnt be able to set more than one style to Review at a time, i asked mr Etaew to look into that.

Crystaltripartite status has been set to Approved

I was going to suggest to add some volume to crystals, but after checking it out in game i believe it looks perfect as is. Good job, happy to approve :)

Glitterine Staff status has been set to Active

On the most left are current material maps, in the middle and on the right are variations of maps that would work. Please note that voxels that are mapped on Type as anything but default-white can only have default-red mapping on Specular. Other way around works too, if you have voxels that are mapped Iridescent (or metal, or anything else but default) can only be default white on Type. Hope it makes more sense with image.

Another thing, adding almost-transparent voxels to connect something and make it not-floating is not a way to go. My bad, i should ve mentioned it right away, i usually do.

Changing status back to Active for now.

Corrupted world devourer status has been set to Added

It can be found in Cursed Vale biome. 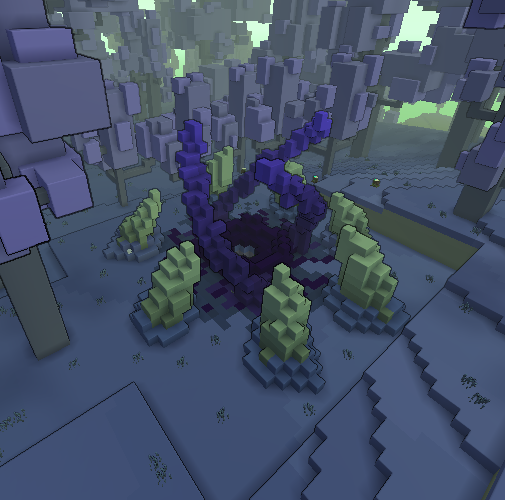 Weathered BattleGrounds status has been set to Added 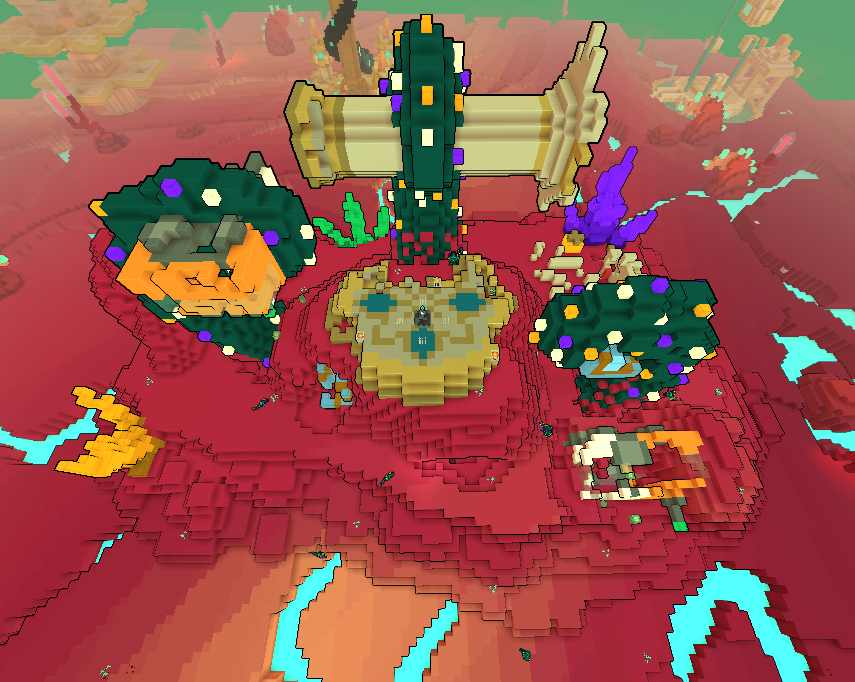 Commented on: Gaze of the Shadows Dungeon (1 Star) creation

Commented on: Gaze of the Shadows Dungeon (1 Star) creation 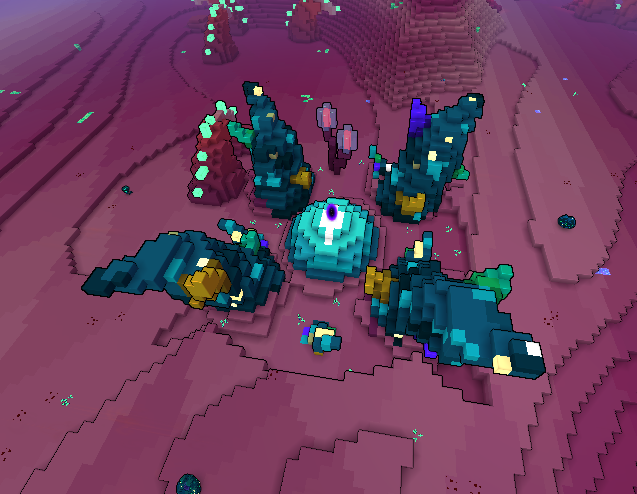 Underground Hideout status has been set to Added