We asked our friends over at Laezaria to put together some tips for the console players who are just about to receive the Crystal Combat update. Thanks to

For more information on the Crystal Combat update, check out our Geode Surface section.

If you can get a Stellar Cosmic Empowered Gem, skip U8 Geode Topside entirely and just go directly for a set of Level 2 Crystal Gear in U9 Geode Topside.
tip by Smellyalater :)))

Remember that the Berserk Battler Empowered Gem can give up to 750 extra Light, when shooting enemies - Easy way to skip the restrictions.
tip by Smellyalater :)))

Don’t spend Crystalline Cores on low level Crystal Gear, because it’s hard to get. So, if you have a lot of Flux, you can spend it on Credit Pouches on the Market to get 4500 Credits and get 33 Greater Geodian Topside Caches which comes with an additional Glowing Geodian Topside Cache which contains a 100% rare result.
tip by Sightless

You're going to need upwards of 24k Crystalline Cores to finish maxing all Crystal Level 3 Gear for all classes and getting all the new craftables, so don't waste em on the Empowered Cosmic Gem Boxes - They are not worth it.
tip by Smellyalater :)))

Don't worry too much early on about getting the new Geode Style Stashes, they are expensive and only give 1 Mastery Point each.
tip by Smellyalater :)))

If you’re having a hard time acquiring enough Light to reach U10 know the best way to get enough would be to level your Cosmic Gems to 15 and ensure they have had 2-3 stat bonuses on Light, if not then try another Cosmic Gem. It will add up quite quickly.
tip by Froppuccino

Level ALL Radiant and Stellar Gems (including Empowered, and to ALL Gem Colours, not just Cosmic) to level 15 and deconstruct them, this will always result in you getting a lot more Gem Dust from basically almost nothing. When levelling your Gems to 15, try to do it on Gem Day, it stacks with Patron and you will get a massive reduction in Gem Dust Cost.
tip by Altairyx

If you already have a maxed Power Rank (or close to max) class and have stockpiled resources to max the new 4 Cosmic Gems, then don't bother with Light Boosts, because you will have enough damage in U10 with 0 Light Boosts.
tip by Arion

You should throw all Stellar Gear away (not the Rings) since a Crystal Level 1 Gear with full Pearl and 0 Stars has the higher stats than Stellar with full Star and Pearls.

So think clearly on how you spend the Crystalline Cores and Forge Fragments.

Stellar Gear can be deconstructed to get Pearls of Wisdom. You don't need to buy additional.
tip by _Orangea :)))

Sell your Pearls of Wisdom now, they'll drop in price massively since they will be very common.
tip by Arion

Don't waste a Golden Dragon Effigy on the Sandsower Dragon, it's easy to farm (Don't be like me)
tip by Smellyalater :))) 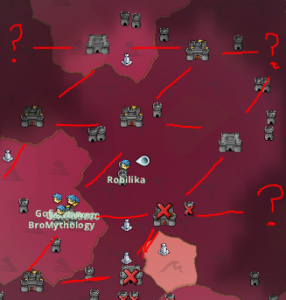 If you get Crystal Level 3 Gear with bad Third Stat Roll don’t destroy it, just wait for the Third Stat Re-roll Week and change it.
tip by Dikoz

Dont forget to pick up the Geode Outpost Adventures. 2 Nitro-Glitterine is not a lot but it counts for your Weekly Quests Leaderboards.
tip by Noudas

You can use Origin Portal Potions to quickly teleport to an Outpost for a Loot Collector and Rejuvenation Station to re-fill your Flasks (and Adventures) and quickly go back to where you were grinding.
tip by Chronozilla ❤

Aim to stick together with other players in 5 Star Dungeons. Split up, you will usually get loot from 1 to 3 Chests. As a unit, you can get loot from all 5 Chests in each 5 Star Dungeon. This will greatly speed up the rate at which you farm Cosmic Gems and Crystal Gear.
tip by Surge

If you want to survive, I highly recommend the Unyielding Emblem, because it grants a few seconds in Invulnerability and the Mages (a geode topside enemy) shoot really fast and do a ton of damage.
tip by Argonaut_of_MC :(((

Start farming with the classes you plan to max first, even if it's not as quick as you want. Crystal Level 3 Gear can take some time, and especially when you want a specific item and a stat.
tip by Criteox

With the new passive elements of the Cosmic Empowered Gems, the following uses are recommended:

You can Pearl and equip Crystal Level 2 and 3 Gear but do not upgrade them yet first, as the materials required is going to be expensive.

Fully Pearl your Crystal Gear since you will be able to Loot Collect it when you get better gear and you will receive the Pearls back.
tip by Balski61988

Hook up a keyboard while upgrading Cosmic Gems, you can spam the spacebar and upgrading will take a fraction of the time.
tip by Balski61988

Cosmic Gems are the new gem type, which can only be found in Shadow to Stellar quality on Geode Topside, there is no new gem tier.

For grinding the new U9-U10 Geode Topside, you are going to want as much Light as you can, for this pierces through the resistances ALL the creatures in Geode Topside have.

A good way to have a lot of Light and still have good overall stats is to have 2 sets of Cosmic Stellar Gems.

You may earn 1 Gold and 2 Silver rewards from 5 Star Dungeons daily, both of which require beating the dungeon in under 1.5 minutes.  (Silver has more leeway on the time requirement.)

Be sure to collect these rewards every day for 14 Crystalline Cores, which are used for upgrading Crystal Gear.
tip by Demisedulous

Geode Topside is really hard. If you really have some trouble while farming, Don’t hesitate to see others tips on Trovesaurus.com.
tip by AAA_Doudou_

Magic Find does not influence Crystal drop rarity. Crystal Gear can be dropped with 0 Magic Find on U8 - U10. Magic Find Increases the chance to find multiple Crystal items.
tip by DR4G40D3F0G0

Focus on farming 5 Star Dungeons. Each dungeon contains multiple 3 Star Quests, which help with Star Bar and Tomes. You will most likely also be with a group, which increases completion time. You also are getting loot drops and Cosmic Gem Boxes like normal dungeons, in addition to the 5 Star Dungeon specific core rewards.
tip by DarkTechno