abbie
What exactly causes this to happen is if the UI that unlocks the cursor is only open for 1 frame. The frequency at which this happens seem to be more often with framerates higher than 120. As stated in the original report, this will only occur if you have moved your camera while the cursor is locked since the last time you had a UI open.
49d

I have less interest in Trove at the moment, so no guarantees I will ever want to take the time to do more work on this or any other mod. Sorry.
2mo

abbie
I made sure it has no relation to mods. It is normal for the M2 ability to activate at the same time the right-click is processed. Make sure that:
1) Your window is not an unusual aspect ratio; the hotbar has always had issues detecting inputs at weird aspect ratios. The default windowed resolution of 1366x768 should cause this to happen.
2) After dropping the item into the hotbar slot, move your cursor at least 1 pixel any direction before dismissing the inventory UI, but make sure it is still hovered over the hotbar slot
3) You are using a movement key to dismiss the inventory UI.
2mo

Yes that's the problem. Also worth noting that all other Trovian adventures give XP despite their descriptions not explicitly stating they do, which can make the bomber quest not granting XP be perceived as a bug.
3mo

abbie
Any updates on the status of this, or if I need to provide additional info? This bug makes farming foraged fragments rather annoying.
3mo

you can use /uiscale to increase the size of all ui's. other than that, no.
3mo

abbie
Most of them look pretty nice, though the power rank icons are kind of blurry in comparison to the default ones. Here's a full comparison image if it makes it easier to notice: https://i.imgur.com/zNSdMIZ.png

I'm guessing you designed these as larger images and then downscaled them to be smaller afterwards, making them look a bit smudged in the process. If this is the case as you still have larger versions of the images, maybe you could try downscaling them by either using a different interpolation method or no interpolation at all to see if it helps keep them looking crisp.

There is no bug specific to target dummies, but what they are most likely referring to is that club worlds with a high cumulative uptime begin to have delayed updates when processing some things. The most easily noticeable things that are affected by this are combat, crafting, and world item drops. It is especially noticeable when shooting target dummies as it looks like 50% or more of your attacks do not register at all. I can't give an exact timeframe as to when this begins happening, but it seems to have affected most clubs that have been used on a daily basis for around a year or longer on PC.
4mo 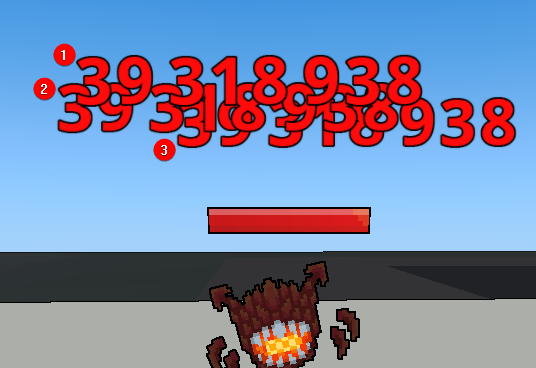 abbie
Try comparing rates with and without Patron, they will most likely both have a 25% chance to grant an additional gem box instead of a 50% chance with Patron. I think this only affects 1-Star dungeon objectives, and have a feeling it relates to this change made during the patch on 2022-06-30:
Fixed an issue that was causing 1-Star dungeons in some Geode Topside worlds to drop additional Cosmic Gem Boxes.
4mo

abbie
The bug is in the wording. The message should say "Gem boxes collected: {0}/{1}"
I just logged on today and it shows 0/3 for me:

This is already mentioned in the "known issues" section, but: