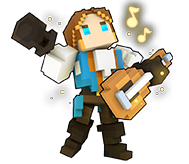 The Tune Up! update brings the new Bard class.

Bards embellish with relish, singing their song to assist their allies' abilities and enfeeble their enemies. Unleash a mighty kabong with your lute fist or cultivate a crowd with your cadence - playing to perfection powers your percussion.

A pulsing gold and blue ore that when touched fills ones head with musical inspiration.

This ore is found rarely in lower tiers of Geode Caves.

Melody is used for the Bard’s abilities and is generated from the Bardsong buff. Gaining Melody rotates what ultimate the Bard has access to. Having high Melody will also increase the Bard's basic attack damage. Melody is displayed on the Bardsong buff bar.

A parry attack that deals 200% damage in a cone and grants the user an invulnerability bubble for 1 second. Nimble Dance removes 1 Melody. If used correctly during the Bardsong buff it will add 1 Melody.

Throws a singing crystal onto the ground. Whenever a song is used to buff nearby players, the area of effect is around both the bard and crystal. After using the ability Singing Crystal swaps into Crystal Pop.

Starts the Bardsong buff and adds 1 to Melody. Bardsong periodically spawns icons above the Bard’s head. If the player uses the ability that matches the icon while it is active, they will gain 1 Melody. All Melody is lost when Bardsong buff ends. Duration is 50 seconds and displayed on the Bardsong buff bar.

Using this ability while the Bardsong buff is active will refresh the song, keep your current Melody and add 1 to Melody. Abilities that can be used to gain Melody from the song are Basic Attack, Primary, Secondary, and Dodge.

The Bard has increased attack range and bard songs have increased effectiveness:

thank you for the neat arrangement <3
but i think bardsong buffs lasts 30 seconds instead of 3 seconds. also remove 3 melody instead of 5 now :3

maybe it wasn't written wrong when you wrote it, i think it was changed when it came over from PTS to Live or they do hotfix

Thank you for the poke, I've added the values from the live release notes, so they should be correct now :)

wee thank you for your work :3

I've added the values from the live release notes, so they should be correct now

The bard class is a bland name for a class, maybe change it to something more consistent and wacky feel to it like Vagabond Bard or something rhymes and matches its origin biome.

cannot wait for use bard to test my mod

this is so cool, i wonder if its actually gonna get in game :), hope it comes soon lol