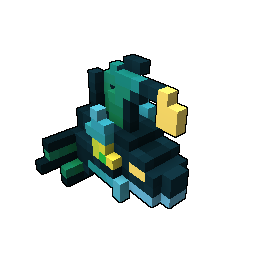 Thallasion, Shaper of the Currents

In eternal dance he weaves the ever-changing tapestry of the oceans.

Dev Tracker 5
Posts the Trove developers have made that mention "Thallasion"
Trove - Into The Deep Hotfix 2 - Jan. 21, 2020 Mobi / Trove Forums

Here's the patch notes from the update on PC and PS4 today. Xbox One will receive this update at a future date.

Just when you thought it was safe to go back in the water - Thallasion, Shaper of the Currents invades the Drowned World and he’s not just practicing the backstroke. Take down this wet and wild world boss to earn your very own Thallasion legendary dragon mount!

Reel in this acid-spewing terror from the deeps!

You’ll find Thallasian underwater in Drowned World biomes as a very rare spawn. If you’re able to find his submerged lair you can also take the fight right to him.

The Shaper of Currents was born of the sea and from the ocean he receives new life. He's being constantly healed by the water during the fight so you'll need a group of adventurers to take him down. Beware the powerful poison he spits – while it will rob you of your health it will rapidly heal Thallasion.

Collect enough Deep Sea Dragon Egg fragments when you take down this supreme sea serpent and you’ll be able to craft your very own Thallasion, Shaper of the Currents legendary dragon!

Unlocking Thallasion grants all of these permanent bonuses:
You won’t need to fish for compliments on this legendary leviathan!