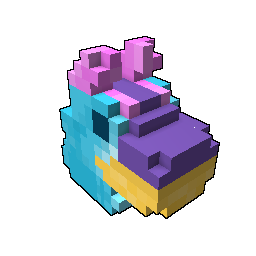 We've updated the database for the Crystal Combat Update on PTS....

New and changed strings detected in the PTS client....

We've updated the PTS database with Styles from Trove - Geode....

The following is a list of new blueprints detected on the PTS client vs the current Live (Heroes) client....

We've updated the Trovesaurus database with the latest patch, see the article for listed changes to Collections, Items, Deco, Styles and Strings....

Winter Is Leaving – Save 50% On Winter Piñatas

Winter is coming to a close on the PC version of Trove and this is your last chance to stock up on the Winter Piñata! Now through March 13th you’ll save 50% on these frosty friends! Enjoy this last chance to find a Winter Piñata Mount and Chilly Pin...

Join the Party Part 3 – Get Hyped!

Join the Party is back on the PC version of Trove to rock your blocks off! Face off against the foul forces of shadow as powerful Pinata Invaders bring the pain. Take down the Pinata Invaders to earn Pinata Coins, a Celebratory Pinata, or a shot at the ...

We've updated the Trovesaurus database to the Join the Party Part 2 patch....

Join the Party Part 2 The Party continues! Shadow Pinata Invaders are again dropping from the sky, and now have a rare chance to drop Lively Launcher Wings. Tysorion the Steward of New Beginnings has arrived! Spend your coins in the Join the Party eve...

Patch notes have been posted for the next Trove patch due to arrive Tuesday, June 16 2015. This patch introduces dragons, challenges, badges and uber 6. Source: http://forums.trovegame.com/showthread.php?21655-Radiant-Uber-Dragons-%28with-Badges%2...

We've updated the Trovesaurus database for the Summer Pin Edition....

We've updated our database for the Monster Bash Update....

We've enhanced our reporting tools and now we can deliver more detailed reports on items that are changed from patches, we've also enabled checks for names and description changes so our database becomes more up to date. Some of these updates may be old...

Join the Party is back on the PC version of Trove to rock your blocks off! Face off against the foul forces of shadow as powerful Pinata Invaders bring the pain.

Toss these special pinatas with your friends and get 3 Pinata Coins for yourself and 1 each for seven Trovians partying hard with you.

Very rarely the Celebratory Pinatas may also drop the spectacular Hyped-Up Pinata mount. This powered up pinata is a very fast land mount that can also glide through the air with the greatest of ease.

Pinates the Purveyor is back in the Hub and selling the mounts from our previous Join the Party events as well as the brand new Hyped-Up Pinata mount!

If you havenâ€™t completed the Join the Party quests in the earlier events they are back again.

Party down all day, erryday!

I took a second look into the data, and it looks like I misread the first time. They are definitely dropping from the thrown pinatas, rather than the invaders. Sorry for the confusion!

Hello, according to the patch notes, this is supposed to be a thing.

However after hundreds of celebratory pinatas throw after the patch, i have gotten none, so i assume they are bugged and not dropping, please fix asap.
I'm doing a bit of extra investigating here. Will update ASAP.

INCORRECT Info:
ASAP update - Hey there, Chronozilla. It looks like the original patch note was incorrect. The Pin Heads drop from the invaders directly. We've updated the patch note to reflect the correct info.

I took a second look into the data, and it looks like I misread the first time. They are definitely dropping from the thrown pinatas, rather than the invaders. Sorry for the confusion!

Winter is coming to a close on the PC version of Trove and this is your last chance to stock up on the Winter Pinata! Now through March 13th you’ll save 50% on these frosty friends!

Enjoy this last chance to find a Winter PiÃ±ata Mount and Chilly Pin Head Hat before spring has sprung!

* Fix bug where Dracolyte can't mine
* Fixed animation issues resulting in class animation lockup bugs
* All dropped recipes should now auto-loot
* The recipe for the Aligning Astrolabe should be back in the Worldspring. Thanks, Tali!
* Fixed bug where Launchpad blocks interferred with horizontal momentum
* Water/lava/plasma is now visible through glass
* Fixed bug where you move at unmounted speed when entering a world mounted
* Slightly increased mount drop chance for the person throwing the pinata.
* Increased Pin Head drop chance for the person throwing the pinata.
* Grass, dirt, and stone found in lairs will now actually be the grass/dirt/stone from their respective biomes.

The end of winter may be at hand, but rest assured weâ€™re sending your favorite frozen mount out with a bang: Now through Mar. 1 youâ€™ll save 50% on PiÃ±atas and get double Glim while adventuring in Trove!

Enjoy this last chance to find a Winter PiÃ±ata Mount and Chilly Pin Head Hat before the new season arrives â€“ theyâ€™ll be back, but not until the frosty touch of winter returns to the air!


CHALLENGES
* Challenges spawn at the top of the hour and last 20 minutes. You get points for completing dungeons and lairs with a 3X multiplier for Uber 5, 9X multiplier for Uber 6, and an additional 3X multiplier if you're playing one of the bonus classes chosen for you.
* The more points you earn (within four progressive ranks) the more Dragon Caches you get.
* Dragon Caches have Dragon Souls, materials to craft Dragon Souls, Dragon Coins, and a nice chunk of forging materials.
* You must be Mastery Rank 30 to unlock Challenges


BADGES
* Badges are a collection type that unlocks as your tracked stats increase.
* Badges currently go from bronze to gold, and grant mastery, Cubits, and in the case of Patron Points, fancy mounts!
* In the near future, badges will go even higher and also unlock other collectables.
* Stats tracked include:
- Friends acquired
- Quests completed
- Blocks destroyed
- Boxes opened
- Consecutive days logged in
- Total days logged in
- Stuff fished
- Patron points earned

NEW IN THE STORE
* Costume boxes can now be purchased in packs of 10! For the cost of 9!
* Chaos boxes have been randomized. If you're lucky, you might get a Chaotic Clipper, Chaotic Cruiser ,a uni-cycle and more!
* Azulian Dragon Caches (see above)


ADVENTURING
* Added a chance for Shadow-2 items to drop in Uber 5 adventure worlds.
* All equipment now has a better chance to drop with additional forge quality stars.
* The Summer Hub is now here!
* The hub generates higher on the terrain now.
* Small caterpillars no longer drop loot.
* Ore should now spawn 'clumpier'.


BUG FIXES AND POLISH
* Deconstructing resulting in more than 9999 of a single item stack will now grant players the correct amount, instead of "just" 9999 of them.
* Fixed a bug where mastery point text in tooltips were very hard to read.
* Fixed a bug where many collectables showed 0 mastery points.
* Fix for forging breaking if you were using a forge while it was removed from the world.
* Fixed bug where quest triggers don't show instruction text; increased interactable area of quest triggers.
* Fixed bug in compass FOV Changing aspect ratio now correctly updates compass.
* Fae Boughskimmer should now give mastery correctly.
* Fixed a client crash.
* Source Spectre mask should no longer clip into hairstyles.
* Summer Pin Head should now display its icon correctly when trading it.
* Fixed a bug where water next to a cornerstone would not update after removing said cornerstone.
* Polish to Radiant Temple Prism Quests Audio.
* Onimous Totem audio - size increase.
* Fixed bug where equipped starter weapons disappeared until relogging if you forge them beyond your current level.
* Fixed a crash that would happen when pressing the spacebar and enter key at the exact same time.
* Color and lighting polish for tutorial, forest, desert, candy, undead, and peaceful biomes.
* Fixed bug where portal tooltips are high above the portal.
* Fixed bug where using the Rally Blade always toggled players being able to teleport to you and never teleported you to other players.
* Fixed a bug where if you opened chat while loading your camera would remain free when other windows were open and it would be really annoying.