This dungeon will automatically create different versions of its self every time! There are four endings, one of which has no boss, the other three do.
Info

Active 2 weeks ago
This Creation is Active and is being worked on.
Activity

Random Mouth Dungeon status has been set to Active

random_dungeon status has been set to Needs Review

Random Mouth Dungeon status has been set to Active

The dungeon looks very interesting from engineering perspective, glad you could make that all work, good job!

Now, it needs to be not only fascinating from technical side, but also welcoming for players. Wouldnt want them running past this just because its hard to find the boss locations. There are a few moments that would need to be addressed:

overall navigation through the dungeon

First of, the dungeon should be easy for players to discover when they are running around on the surface. Currently the teeth are not visible unless you know what to look for and the fake air roof is placed too close to the build, so if dungeon spawns in any sort of hill it will get buried in the ground.

I would suggest making teeth (or an entrance structure) pointing upwards and moving fake air roof to at least 7-10 blocks above the highest point. There should be enough space available to do that.

Another thing, currently if the player jumps in and runs through one of the tunnels to its end they have to return back to the starting point and they wont have any in-built indication of which tunnel they have already completed as every direction looks the same. More about tunnel variety later on, but for the sake of navigating through the dungeon - i think it might be better to have 3 tunnels instead of 4 so players are at least not faced with a dead end OR each entrance should have something obvious on it to help players remember which way they already cleared.

Since players would have to come back to the start, there would need to be helpful jump pads or air currents or anti gravity boosters in the tunnels. Rushing down through the tunnel feels quick and fun while climbing back up without those additional helpful movement boosters is pretty unpleasant. I understand in some variations such boosters might feel out of place, but im still convinced that it will be better with them.

size and variety of boss rooms

At the moment, the dead end, the miniboss room and boss room look identical. The mini boss rooms need to be Bigger as 3* dungeon objectives will most certainly spawn cursed-skull objectives so there needs to be enough space for them. Good size is about 15x15 and ~10 tall for miniboss objectives and about 21x21 and 10+ tall for Boss rooms to make them feel noticeably Grand. Players should not be left wondering if they completed dungeon objective or killed random enlarged mob.

I would also suggest adding some geodian-made structures to break up the plain cave environment. Quest objectives could have some platforms in them or even whole rooms built into the caves. The cave pieces of different cave color (blue?) with those weird cave trees would work just fine, or really anything else that would visually separate quest objective locations from the corridors. 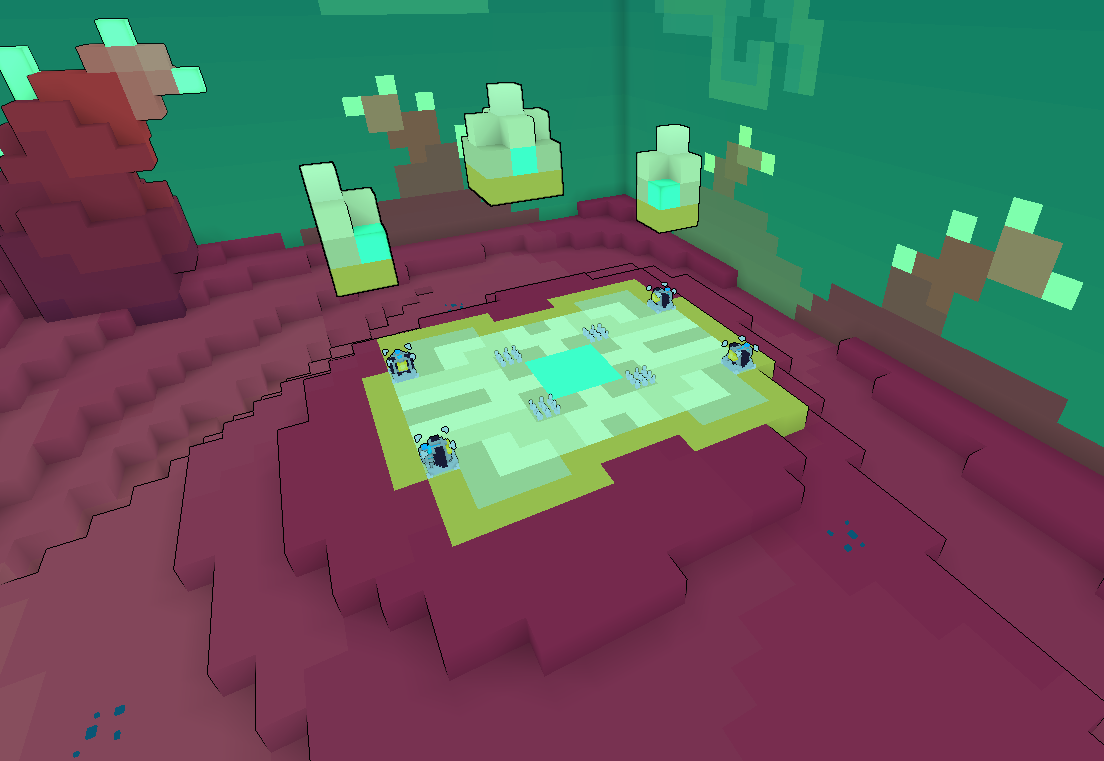 As i ve mentioned before, it is hard to tell which direction was completed and which one wasnt once players return to the starting point. Having an obvious difference on path doorways could be a solution, but even with that it might be hard to tell.

I believe the tunnel rooms would greately benefit from some path-blocking obstacles inside of them. I dont mean a wall that would block all access, but more like something that players have to get through/open/find a way around/ to proceed. You have a lot of pieces available, so adding some extra structures to them would surely spice up the experience and make it easier for players to recognize if they already took that path.

For example, if they have to throw bomb to break some glass it would be obvious that the path has been 'done'.

Some quick mockups to illustrate what i mean by obstacles. 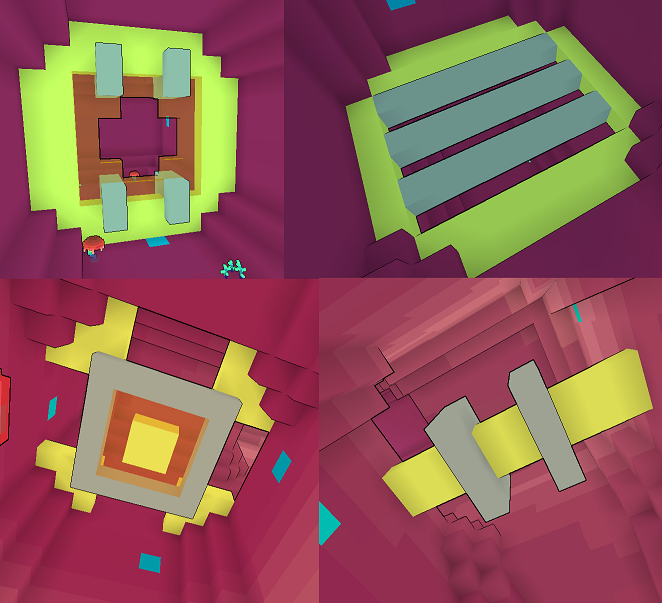 I hope that all makes sense.

The dungeon is really promising and unique, and you already did the hard part of planning it all out and making it work, only some polishing needs to be done.

Im going to change the status of it to Active for now, but i do hope to see it on Review again.

random_dungeon status has been set to Needs Review