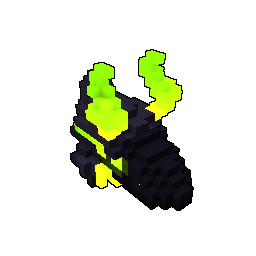 Although touched by darkness, this legendary mount will never stay down.

NEW IN THE STORE
* Chaos chest has been randomized! It's Meownt preview week! If you want a Meownt (and you do, probably more than one) open some chests.

BUILDING
* You can now craft the Cocoa Cascade block at the Cube Converter. This block will generate chocolate for a Cornerstone or Club World.


SHIPS
* All ships have increased acceleration and turning rate.
* Ships now have cannons and oceans have buoys to shoot.

NEON NINJA
* Fixed a bug where Neon Ninja could get a never-ending speed buff after a Shadow Flip.


BUG FIXES AND POLISH
* Improved the aiming display when throwing.
* Fixed bug where all recipes in the Collections window show 0 mastery points.
* Fixed a fishing bug where you could get stuck after reeling in.
* The multi-transfer prompt is now shown when dragging stacks of items into the Deconstructor.
* The consecutive days logged in and max consecutive days logged in stats should work now.
* Fixed a bug where fishing lures cast into the abyss in Radiant Ruins weren't refunded.
* Fixed a bug where you got no fish when fishing with your last lure.
* New VFX for the Shadow Hunter - Relic of the Past and Dead Shot costumes.
* Treasure Isle styles now drop in Treasure Isle zones and can be unlocked by the Style Surprise.