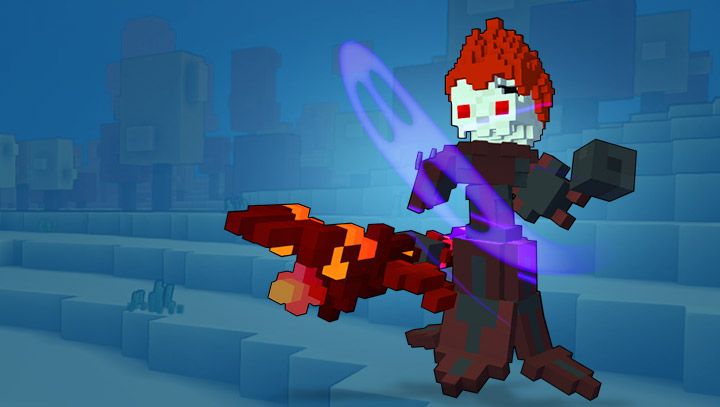 This guide will be an in-depth analysis of the Tomb Raiser's abilities and most effective uses. Steal health from foes to fortify your macabre minions! Or sacrifice your skeletal subordinates to create a gargantuan Grave Golem. Either way, this nefarious necromancer is bad to the bone.

The play style of the Tomb Raiser is similar to the traditional "Necromancer", but with a slight difference. Where most necromancers stand far back and let their minions do all the work, the Tomb Raiser is very much in the battle. Due to your very short auto attack range, you will usually be right behind your minions. Even though the Tomb Raiser is a caster, who are generally very squishy, he is very well equipped to be in the middle of combat.

Notes: You gain a soul every 8 seconds, and whenever something dies near you. The charges are indicated by a ghost orbiting your character. They are used to summon your Bonetourage.

Your auto attack deals 33% of your magic damage per hit to enemies in a short cone in front of you. It also heals your minions in that area, as well as giving you some life leach for each enemy hit. This also slows your movement speed while channeling. This is not affected by attack speed.

Notes: When you have Banshee's Boon active, your auto attack recieves the following buffs.

Throw a restless soul, consuming it and spawning a skeletal minion where it lands. Minions will fight for you for a short while.

Notes: When you right click, you can hold it to change where you throw the little skeleton. The actuall impact of the skill does a massive 1 damage. Throwing it can activate Cursed Skulls, so be careful if you are in a shadow arena spawning minions. The minions have a health bar that decays over time. They don't have a timer before they die, they just lose health while active.

Each minion deals 75% of your magic damage per hit and you can have a maximum of 6 active at one time. Spawning a new minion while you have six will destroy one of them.

Turns the user into a ghost(not literally). While in ghost form you take 90% less damage, and your primary attack affects all enemies and minions around you. Ghost form rapidly depletes your energy and ends when energy reaches zero.

Notes: This skill is amazing, and in my opinion borderline over powered. Not only is it massive damage reduction for you, it is also a massive damage boost for your auto attack. You want to have this up as much as possible, so stacking energy regeneration is a must.

Notes: The Grave Goliath is where most of your damage will come from. The Goliath has two attacks. The first is a regular auto attack, and the second is a smash attack that does more damage. Not only does his damage increase per minion sacrificed, but his size does as well. This can cause issues in tight spaces in smaller dungeons. You can heal the Goliath slightly, but he is mostly tied to a duration. It seems the more skeletons increases his duration also.

The damage increase per sacrifice is as follows:

Having 6 minions and a Grave Goliath up at the same time is what you want to achieve. If you are just speed running dungeons, most bosses will not last long enough for you to reach that point. The best way to deal with bosses is follow these steps.

This will all become second nature as you do it, and is much less complicated than it seems.

There are some special cases though. If there is a boss that is rapidly killing your minions because they have an aoe ability, you will want to summon a Grave Goliath with less than 6 skeletons. The Grave Goliath is very tanky, he can give you the extra time you need to spawn more skeletons if the boss was able to quickly kill them.

You want to have Banshee's Boon up as much as possible. As a defensive skill it is fantastic. It gives you a massive damage reduction (90%) as well as greatly boosting the lifesteal from your passive. It is also a large boost to your damage and makes it much easier to heal your mininos while dealing damage. Because it uses energy so rapidly, it is important to avoid jumping unless you absolutely have to. Stoping your energy regeneration by jumping will massively reduce your damage output as well as causing you to potentially lose minions due to lack of healing.

If you are taking too much damage, the best way to play is to let your minions do all the tanking. Run in and activate Banshee's Boon, as you see your energy getting close to zero start backing out. Wait for your energy to reach full and repeat the process. It is also helpful to use Banshee's Boon to avoid damage from the smash and thrust attacks that some of the bosses and giants have.

Elysian Bandoiler: Heals 20% of your max HP on use and has 18 charges base.

Due to the nature of how the Tomb Raiser works, I would suggest using the bandoiler. Most of the time you are just going to be using the potion for the emblems, not the actual heal, so the bandoiler is the best option.

Doubling your magic damage is huge. It increases your auto attack damage as well as your minions damage. If you are using emblems, this should be your first purchase.

I believe this is the second best emblem. It has the same duration as the Arcane Emblem, so it is easy to tell when you have to use another potion, and the energy regen is huge for you. This will give you much more Banshee's Boon uptime.

Zealous Emblem: Restores all of your spent energy.

Using this, you can technically sustain Banshee's Boon until you run out of potions. In doing that though, you will have a much lower uptime on the Arcane Emblem. If you already have this emblem and you don't want to buy the Energetic Emblem, it can be a substitute.

These are the best allies at the moment. I currently use Chronomancer because it is a massive damage boost. The Teensy Shadow Trader is very good for Shadow Arenas, the damage buff is massive and procs often when killing everything in the cursed skull events.

The Feisty Flamedancer is if you want to go more of a support role. Using that will lower your damage by a good bit, but will give you more utility for a group by keeping your minions alive longer.

The attack rate of the Tomb Raiser is very high, like the Dracolyte, so the HP return from Prowling Shadow would be massive. The only problem is that it would be overkill. If you are in a situation where you need the healing extremely bad, this could be an option. Though, if it gets to that point you should probably drop to a lower difficulty.

The Shield Servitor fills the same role as the Feisty Flamedancer. You would use this instead of the Flamedancer if you keep dying for some reason outside of Banshee's Boon.

This is my current setup for optimal gearing. While you do not need extra jumps, having them is a huge quality of life improvement. One that I value over the extra health regeneration on the weapon.

Trovesaurus : The majority of the images in this guide are from here, as well as item descriptions.

Nouwa (/u/DSTMute) : Leader of the Accurate Skill Damage project on reddit. The skill damage percentages were pulled from here.

This guide went on much longer than I thought it would, but hopefully that means it good. If anyone has questions for me my ign is Buttonslol, or you can leave a comment here. Also, if you like the guide and would like me to do one for another class please leave a comment.

Thanks. This is exactly what I was looking for.