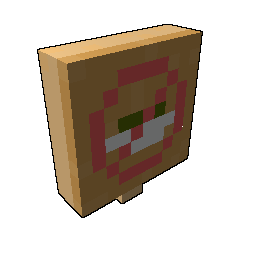 While we've had reports from Trove players from Russia and Belarus not being able to play Trove since March 1, it has taken until March 14 for a reason to be provided to those players. The team even found time to design and release a charity pack to sell but not announce a block on players.

We all know the reason, but if you are taking political action as a company you are expected to announce it.

Etaew's Note: The war in Ukraine was started by Russia for insane reasons and everyone in the country is suffering as a result, the international community rightly so is applying some non-military pressure on the Russian economy and population to help speed the end of the war. As a gaming community, we absolutely agree with the sanctions but feel like the lack of announcements were pretty strange. We know that many Russian players are just trying to get on with their lives and do not support the war started by a dictator.

We will try to keep this page updated if the situation changes.

Since March 1, Trove players from Russia, Belarus and Kazakhstan have reported encountering "Error 2018" when trying to use Glyph.

Players who are experiencing error 2018 should reach out to customer support.

March 1 - Support says they are looking into the issue

We apologize for the inconvenience and are currently looking into this issue. A corresponding report was forwarded to the Game Development Team. Please note that we can, unfortunately, not give an estimate for when this will be resolved yet. For any updates, we recommend checking our Discord from time to time. 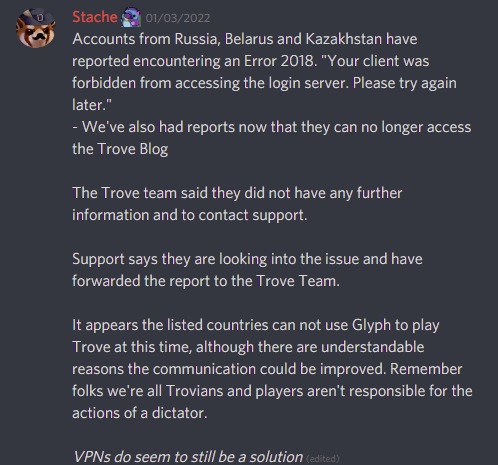 Accounts from Russia, Belarus and Kazakhstan have reported encountering an Error 2018. "Your client was forbidden from accessing the login server. Please try again later."
- We've also had reports now that they can no longer access the Trove Blog

The Trove team said they did not have any further information and to contact support.

Support says they are looking into the issue and have forwarded the report to the Trove Team.

It appears the listed countries can not use Glyph to play Trove at this time, although there are understandable reasons the communication could be improved. Remember folks we're all Trovians and players aren't responsible for the actions of a dictator.

VPNs do seem to still be a solution 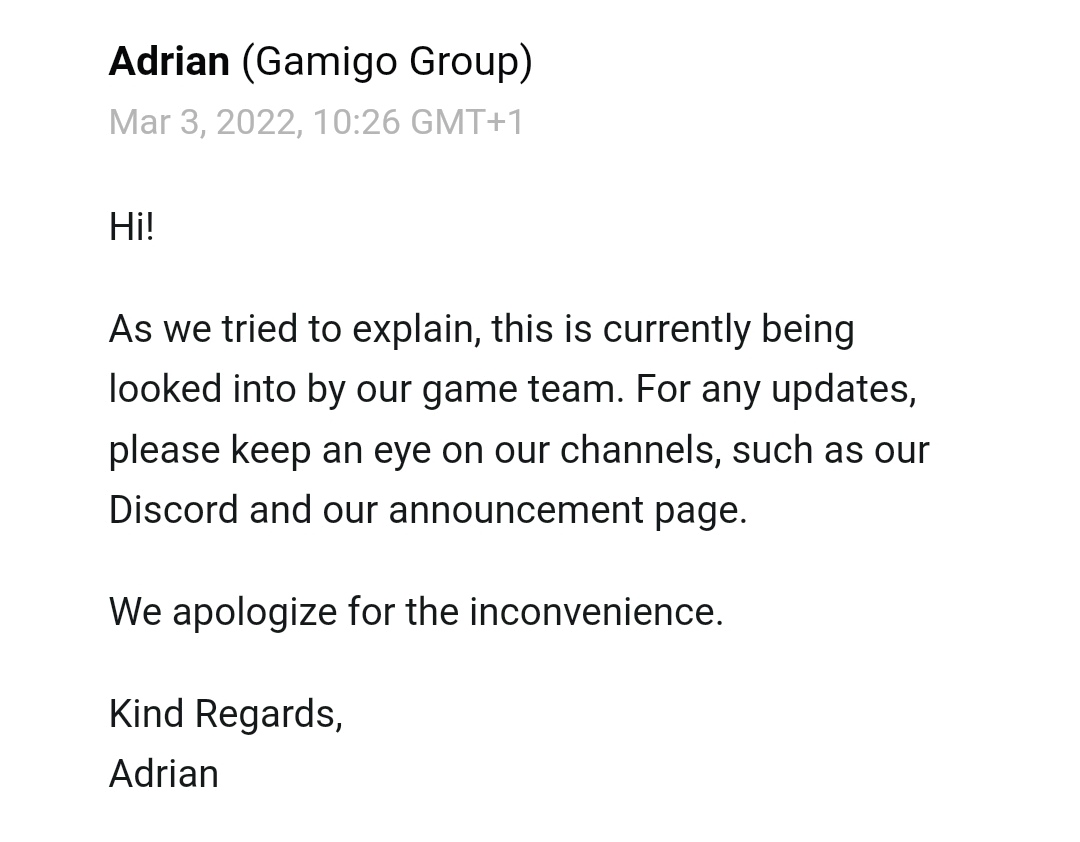 As we tried to explain, this is currently being looked into by our game team. For any updates, please keep an eye on our channels, such as our Discord and our announcement page. We apologize for the inconvenience.

Access Denied: www.trionworlds.com is using a security service for protection against online attacks. An action has triggered the service and blocked your request. Please try again in a few minutes. If the issue persist, please contact the site owner for further assistance.

The Steadfast Friends pack launched on PC for $5, $10 and $20 giving a mount and ally with no mastery.

Laserface later clarified that all money from the sale of these packs (minus the transaction fees) were being forwarded to those in need.

Due to the ongoing acts of war against Ukraine, we currently do not provide services to the territories of Russia and Belarus.

We've been informed that trovesaurus.com has been blocked in Russia.

what the fuck, the russians did nothing wrong, its putin's war, literally so many of my friends are russians and all of them hate the invasion, this is the stupidest thing the devs have done to date. makes me wanna puke.

Truly Putin will fall to his knees and scream in agony into the heavens now he can't play some fucking free to play grindfest MMO. Sickening seeing all the utter insanity regarding the 'international community' going utterly insane about anything and everything any russian has ever touched is now cancelrinod. I swear it's like fucking Reddit has taken over every institution with how ridiculous it's been. Ban russian cat breeds from cat pageants, strip the first man in space of his honors because he's russian, destroy a man who escaped the soviet union 40 years ago's 30 bus fleet,  to name just a few I've seen.

Facts bro, Trove - "We're doing our part to help Ukrain #WeStandWithUkrain" Bro this is a MMO, what do you think russian players are gonna do? L Trove

Russians still play trove, enough to use VPN, login accs, turn off VPN, launch the game, close the launcher after that moment, when trove won't show loading screen with arts/whatever. why closing launcher? because "remember me" checkmark being much more useless than gamigo's community-managers, it logs out account while you play

Trove your trying to hard to get with the trends, leave gamers alone, they have nothing to do with this, your not helping at all in this case, no offense but I think that was kind of a Crappy move on your part.