Making the most out of bad stellar empowered gem pulls with efficient use of weekly leaderboard rewards.

The target of this article is for players who've settled on what class(es) they would like to augment but may be unaware of a potential source of gem dust, or how rewarding it can be.

Upcycling, what is it?

How does that all work?

Alright, potentially up to 40% savings when attempting to upcycle a gem, what else?

First we have to talk about this thing called the Gem Karma Bar, when you attempt to level a gem there's a progress bar that fills when you 'fail' to level a gem. Gem boosters can increase your odds of a level up but their ability to do so weakens as you rise in level. 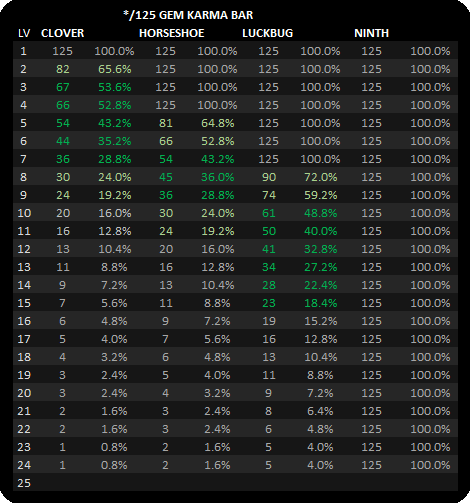 Figure 1. Gem Karma Bar Table - Karma values and potential level up chance for Stellar Empowered gems. *Levels to 24 and 25 can fail with karma values of 87 and 72 respectively with a Ninthlife, I guess a mod adds those values (Karma tooltip/Enhanced UI) to the tooltip so that may be misleading.

Okay, I know my odds now, but what do I get?

Hmmm, I'm not sure. What would potential scenarios look like?

Figure 4. Samples Table - (25) Samples were exported to PTS, twice, for this data set. 0's were when a 'Double Level Up' occured. Click image to review the results in a new window.

In short, turn your 100 Clovers, 40 Horseshoes, and 20 Luckbugs into 20 Clovers, 24 Horseshoes, and 24 Luckbugs for a pretty solid chance at turning two not-so-stellar empowered gems into what is the equivalent of what two Dust Tomes would give, on a weekly basis.. even if you don't have patron.

A tip to keep in mind would be when you've failed close to filling the karma bar, see if a lower booster would fulfil the karma value requirement. Figure 4 does not reflect all the times (5) luckbugs used could have been (4) luckbugs and (1) horseshoe as an example.

For further context, I've opened 16,800 Shadow Tier Gemboxes (image, imgur.com) and the average dust is 64.4 per box [with patron], so an average stellar emp loot collected with bonuses active should be equivalent to 93 gem boxes [with patron].

Hey I think they changed the number for this, tested it twice to five with T3 potent opulence. Ended up losing like 20 dust each time.

On Live, made an avg profit of 6K dust.