Building: Creating a mini-game or arena 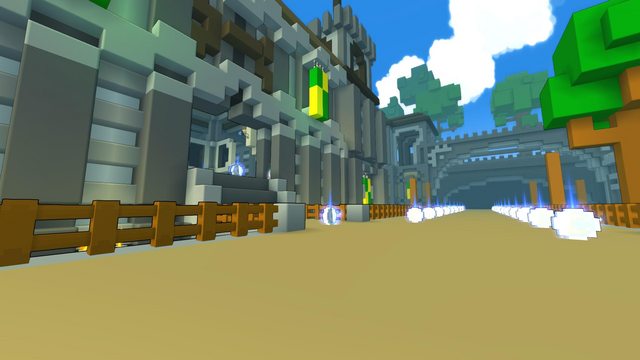 The Snowfest & Get Crafty patch introduced the new Coin collecting and Race minigames to the (PC) game. Minigames are based on arena technology, so this guide will tell you exactly how you can create minigames and arenas.

When you're a club architect, officer or a leader, you can create a club minigame/arena everywhere (given you're not blocked by /zonerestrict). Do keep in mind that a minigame/arena is restricted to a world chunk. These are 125 by 125 world pieces in the club world, which will not be aligned with club biomes.

To visualize a chunk, you can use the

Arena Survey Tool. Equip this tool and press the corresponding key to highlight the chunks area. It isextremely useful to put a marker block on the edges of your work area, to have a permanent indicator of your workspace.

When you've selected your location, it is time to start building. If you're in the lucky situation that a chunk aligns with an existing building or if it was a previous arena, move on to the next step

Before you start, you can do all the clearing manually or you can use two terraforming items: (Do note, these clear out all of your chunks content!)

Build your minigame area like you would make any other building in the game, when this is done, you can place the required items.

The following functional items can (and should) be placed within your chunk to have a functional minigame or arena. Because each type uses other items, these are split into separate chapters. Do note, you can mix these types, but coins will be visible in the racing minigame if you decide to use both in one chunk.

A PVP arena requires at least one of the following, if none of the CTF items are placed it will be a Deathmatch:

Placing one of the following items in your minigame chunk will enable their features. You can choose (n)one or all of them.  These special blocks can be placed everywhere in the chunk:

The portal is the last thing you should place, if you make any changes to either decoration, blocks or functional items, you will need to replace the portal. The portal is also the item which determines the type of game it will be. These can be combined; a minigame area can be both a 5v5-player CTF and a 3v3-player DM and a coin collecting game. You can choose the following portals:

You can test your minigame without the required number of people, by typing /testarena, while waiting for other players. These matches don't count towards challenges or pvp-rating, but enable you to test the basics of the arena or minigame. Exiting the test can be done by going back to the club. If changes are made to the arena, remove and replace the portal.

You might also want to add your arenas and dungeons to the forum threads on forums.trovegame.com. The Trove Development team often picks out new arena's and minigames from these lists. Go to: