Gems! How do they work?! 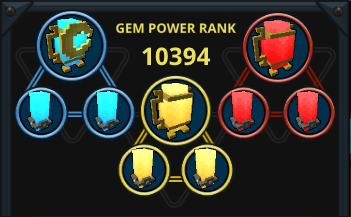 Basics and Advanced!
How is Power Rank calculated?
How exactly does leveling increase stats?
When do you get more stars?
What are the best possible Gems?
What is the highest possible total Power Rank?

Have no fear, your answers are here!
Firstly, I'll go over the basics, in case you're new to the whole Gem system.
After that I'll go into some more advanced territory, answering the questions above.
Most of this guide will focus on Stellar Gems and only to some extend Radiant Gems.

- Gems can be leveled up by using their respective Gem Dust type and some Flux.
- Gem rarity can not be increased, the highest rarity is Stellar and can only be aquired in Uber 9 worlds, as a rare drop from Shadow Boxes.
- A level up attempt can have 4 different outcomes:

- Cracked Gems still grant stats and Power Rank, but cannot be upgraded further.
- Cracked Gems can be repaired using a Re-Gemerator from the Store (500 Cubits)
- To prevent cracking and/or increase chances for level ups, you can use 4 types of Boosters which are available at the Store:

- Boosters can also be aquired by opening Gem Booster Boxes (500 Cubits) and participating in weekly contests
- Boosters will be consumed like resources for every Level Up attempt.
- Level Up attempts can fail only a certain amount of times, depending on the Gem, its level and the Boosters used. This is indicated by the karma bar above the gem UI.
- Keep in mind that Boosters give you a higher chance at succeeding and don't guarantee it!

I personally recommend getting the Jade Clover Journal as soon as possible for the weekly 100 Jade Clovers and not using anything but Jade Clovers on Gems below level 10 to 15, depending on how many other Boosters you are willing to spend.

For most classes, the best combination of stats you can get is your class damage type (Physical or Magic), Critical Hit and Critical Damage. This type of Gem is most suitable for Trove's current power creep meta. The faster you kill things the less damage you take, basically.

But of course you also need some survivability, so having a combination of at least some Maximum Health and % Maximum Health is also very important. For the ratio I recommend roughly 2 to 1 for flat to percentage, as having too many percentage boosts will eventually result in diminishing returns.

Health Regeneration as it stands currently is a bad stat and doesn't really do much for you. Health is a lot better because you get more value out of your Flask and Rapt Berserker or Prefect Penguin heals, which are your main sources of sustain anyway, making HR almost completely useless.
Note: The developers have acknowledged that HR is weak and they're looking into it. A rework or a buff might be coming soon.

If you are struggling to reach Uber 8 with Shadow Gems or Uber 9 with Radiant Gems, my advice is to only level Gems with at least 3 stats and if possible 2 stars. The more base stats and the higher their rolls, the higher the cap for Power Rank gets!
I recommend not getting any Gems higher than level 15 as the resources needed per Level Up will have gone up rapidly by that point and there are no more Large Boosts to gain (we'll get into more detail below). Later you will replace them with Stellar ones anway.

Now, let's get to the nitty-gritty!

For determining which gems are really good, we first have to distinguish between Empowered Gems and normal Gems.

The main difference is that aside from the amount of inital stats, Empowered Gems will always have the best possible result on stat rolls (100%), whereas normal Gems have a randomized range (50% to 100%).

The only RNG factor on Empowered Gems as a result is the amount and type of stats at level 1 and which stats the 3 Large Boosts land on, in addition to the Empowered ability, if it is not a class gem.

How is Power Rank calculated?

Each stat type has an assigned ratio to Power Rank.
Here are the ranges of all different stats, 50% being the lowest result on normal Gems and 100% being the highest (or Empowered Gem standard), additionally how much of each stat equals 1 Power Rank:

A normal Stellar Gem at level 1 can range between 100 and 600 PR. 1 stat with the lowest roll is 100 or 3 stats with highest rolls is 600.
This Gem has 10 Magic Damage over the lowest possible roll, but the PR result for each stat is always rounded down:

The Empowered Gem or Class ability always adds an extra 100 Power Rank, thus making Stellar Empowered and Class Gems cap at 700 at level 1 with 3 stats, or 300 at the lowest with 1 stat.

Keep in mind that some stats can be misleading, because Trove rounds the numbers in tool tips. Here is an example of a Gem that looks like it should have exactly 200 Power Rank but doesn't, because the approximately 3.95% Critical Hit is rounded up to 4.0% in the tool tip. 3.95 divided by 0.02 is 197.5, which is rounded down as mentioned above:

How exactly does leveling increase stats?

There are 4 different boosts that can happen when successfully leveling up a Gem: For the sake of terminology you could say that a normal Gem starts with up to 3 Large Boosts already (that being the 3 stats and their rolls). And then it can gain 3 more Large Boosts leveling up to 5, 10 and 15. These are the 6 major points of RNG which decide how far below or above average your Gem will be.

You can see how good your Large Boosts are by paying attention to the Power Rank you gain when the level up succeeds (100-200).
Once your Gem hits level 15, the RNG is behind you (phew!) and all further increases will be static. When do you get more stars?

Stars are simply an indication of Power Rank. They don't actually correlate with the amount of stats directly. I'm still researching the exact values for some ranks, feel free to send me screenshots if you find any Gems that contradict this data.

For level 1 Empowered Gems, stars to stats happen to correlate 1 to 1, thanks to always having maxed out values and the extra 100 Power Rank from the ability.

What are the best possible Gems?

Below, you can compare your Gems to the maximum Power Rank for each level and see how close it is to being perfect, or figure out how many base stats your Empowered Gems started out with: 600 might be the best possible result for a level 1 Stellar normal Gem, but even 500+ Gems are already really good if they have the right stats.

Since there are 6 points of RNG, getting the truly perfect Gem is incredibly unlikely. With all rolls hitting 95% (2660 Dmg, 3.8 CH, etc.) that would still be one in a million. And that is not even considering how rare it is to get a 3-statted Gem and having the right stats on it in the first place.

Radiant Gems only get 3 small increases per Small Boost and a full Large Boost is worth 113 Power Rank due to the lower stat caps. What is the highest possible total Power Rank?

Empowered Gems cap at 1855, normal ones at 1755. All primal dragons combined give +10% accross all gems. Stellar gear is 1014 at 5 stars. Then there is mastery, character levels, dragons, ring, ally, flask and emblems.

Almost 80% of your power would come from Gems in that case, a fully maxed set of Stellar gear making up only a little under 14%!

I hope my guide helps and sheds some light on all the numbers and crazyness.

Now go grind up some Gems to increase your Powder Rank! :^)

May RNG be ever in your favor!

Will this guide be updated with current or future information. (Like the upcoming U10 with crystal gems)

Please edit your article thanks ^^

Ps: if you don't trust me just try it, i'll try to screenshot it anyway.

The gems system is even worse than I though.

That helped me alot, ty captain <3

I hate gems. They are such a pin.

Do you have a screen shot of this because currently the gem programming should not allow for this to happen.

such a trek>.< thanks for the info

This was very helpful, thank you to the creator.