Most of the files look correct, good job!

- there is no .dungeon file uploaded, please make sure it is there.

- mini boss spawner in the boss11.blueprint room is not in the middle of fighting space. I understand there there is lava in center, but with current placement if it spawns cursed skulls half of the area will be inside of the wall which can prevent monsters from spawning properly.

Going to change status to Active, but i ll try to keep close eye on Review notifications over the weekend.

Ornated moonstone staff status has been set to Active

Staff looks good, and it does have unique elements but overall impression makes the design feel close to

Sapient Scepter. There are more in-game styles that feature same-ish shapes like

Chronomancer's Cudgel and the 'radiant' color pallet relates it to all the Radiant designs.

Dont get me wrong, its a very well-made staff, but im afraid i do need to ask you to make it stand out a bit more. May be instead of gold it could use that greenish blue/grey metal that is used on Moonstone?

Going to change status of your creation to Active for now, set it back to Review if you upload any changes.

Starglass Battleaxe status has been set to Approved

The axe is looking awesome!

I did not consider that starglass weapons might be a source of color pallet, my bad. In this case it indeed makes sense to keep colors as they are :)

Very well done, happy to approve! Thank you for uploading the blueprint.

Great job on adjustments! Id remove some more spikes but there are safe paths between them as is so thats good. Loving new variations and decorations, they really do add life to builds :)

About the GM Quest thingies, it would seem i wrote it in a way that was hard understand, im sorry. I ll try to be clear:

Following images apply to all 4 miniboss rooms you have. Only the GM Quest need to be placed and it should be in the middle of a room. 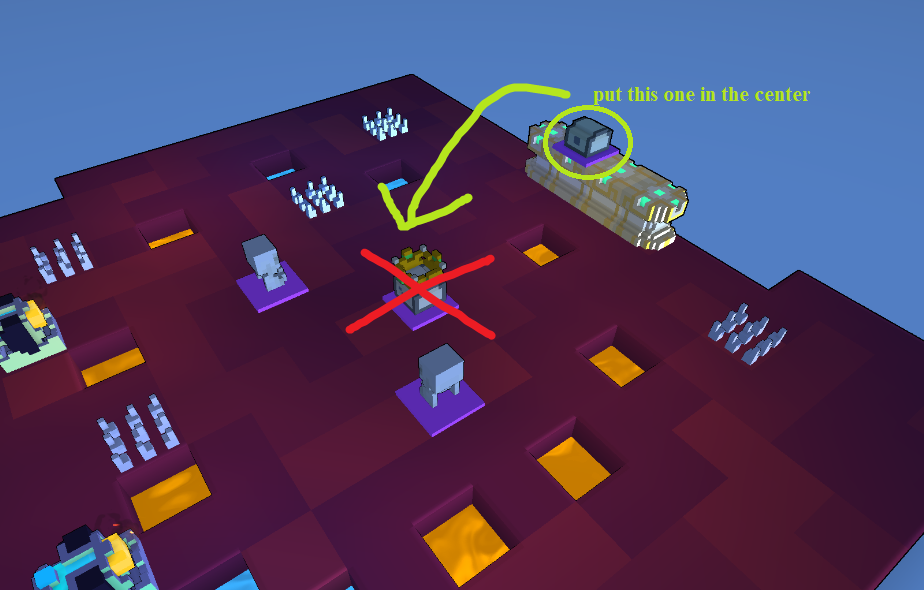 For the Major boss rooms you only need GM Boss Quest item, which should also be placed in the middle. About the portals, you have two blue portals on the castle3, while you should have a purple portal (GM Quest Teleporter near the boss) + blue portal (GM Quest Teleporter Outside where you want players to exit the dungeon). On the image i suggest to put it near the boss (on both variations), but it will also work if you replace the blue portal on top of castle3 with purple one. 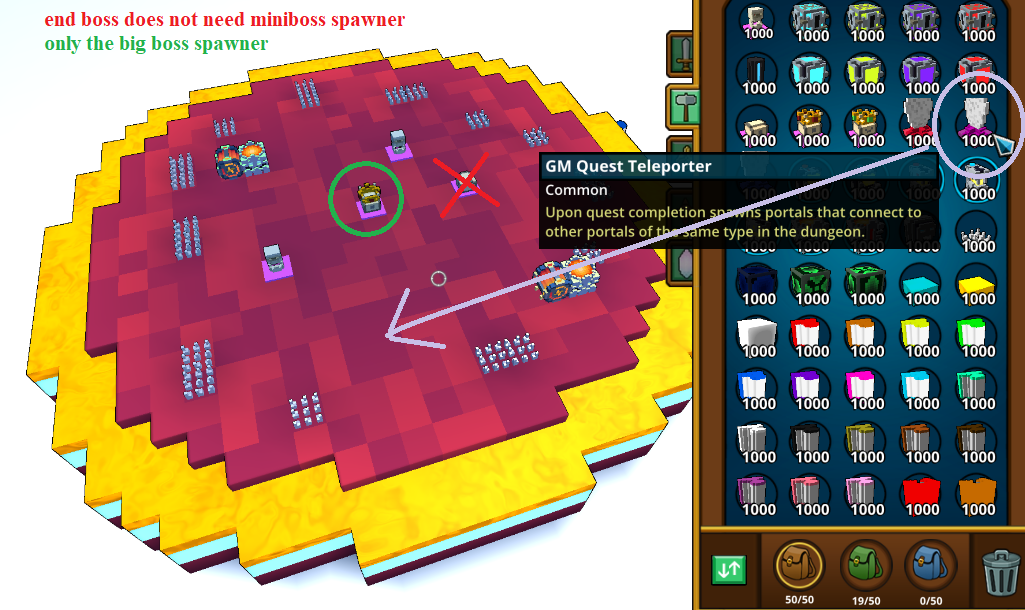 Lastly, i was trying to figure out why your endboss2 does not spawn and found this in your .dungeon: 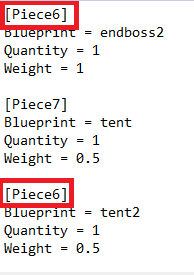 Please make sure that every [Piece] has a unique name. Tent2 should have Piece8 (or anything else other than names you already used for pieces).

These fixes shouldnt take you more than few minutes :)

It always makes me happy to see new dungeons :) Outstanding job, loving the layout of the castle :)

Few moments that would need to be adjusted before i could approve this:

- Since we have not yet received any guidelines from Dev team about 5* dungeons im assuming this one is a 3*. Yet almost every boss room seem to contain the Gm Master Quest which is a Dark Heart interactive switch that starts a timer on 5* dungeons (it was not in metaforge guides since its a recent addition but ive added a mention about it to all pages i could recall). Please make sure that your minor boss rooms only have GM Quest (just one in each room that could spawn minor boss) and your major boss room only has the GM Boss Quest.

- Is this part meant to create a huge waterfall? That would be gorgeous but very unfriendly for console users unfortunately. It is alright to have some falling water but please make it contained and less wide-spread. Also as a variation suggestion, since you have 2 of Tentacle parts, one could have water and other could have some other liquid :)

- Are the insides of the dungeon meant to be accessible for players? There is an entrance hole next to one of the tentacles and couple of smaller holes nearby, but there doesnt seem to be anything on the inside. I would suggest to close up the hole and preferably fill the insides to make sure players dont bomb in and get lost/confused/frustrated because they cant get out. Another good thing about filling those empty rooms - your dungeon will have less Voxel Surfaces displayed = less things for game to process = better performance. 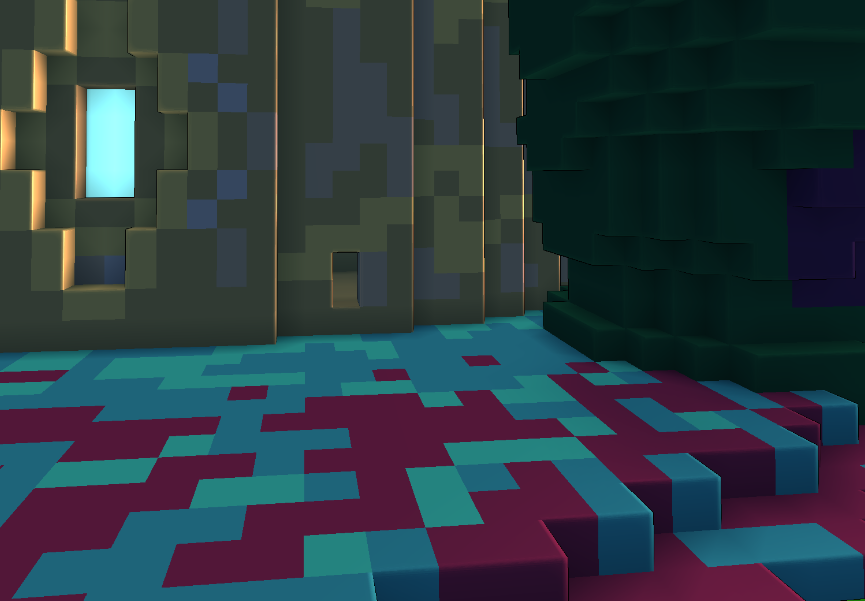 - If you will be editing the main Castle part anyway, it might be good to add some more of those nice pillars that you have on top to the walls or miniboss areas.

- Last but not least, variations. You already have few separate rooms that get changed and replaced, but it would be really good if you added some more distinct features to them. At the moment you use lava, spikes and two types of turrets throughout all 4 variations of minor bosses. You can look at your own Major Boss rooms for good example of room variation. Also, spikes do not need to be everywhere :)

Overall - very nicely done! Great layout and flow, pleasing visuals too. Going to change status of your creation to Active for now, but hoping to see it back on Review!

Starglass Battleaxe status has been set to Active

Now thats a melee with a wow :D Stunning design, loving the mix of tribal shapes and almost radiant royal colors. If you are aiming for the meteorite fragments i would suggest to go for somewhat deeper shade of turquoise with a little bit of shading.

Another thing, while i do very much love the current design and it would ve worked just fine in the past, it is required for all melee weapons to work on all classes, and with as large pommel part as there is atm, it will go into the ground on Knight. 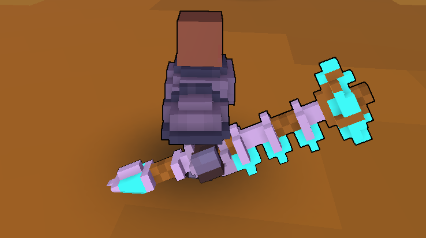 Melee weapons should not have much more than 3 voxels behind the Attachment point. Luckily you still have a lot of room in the front. 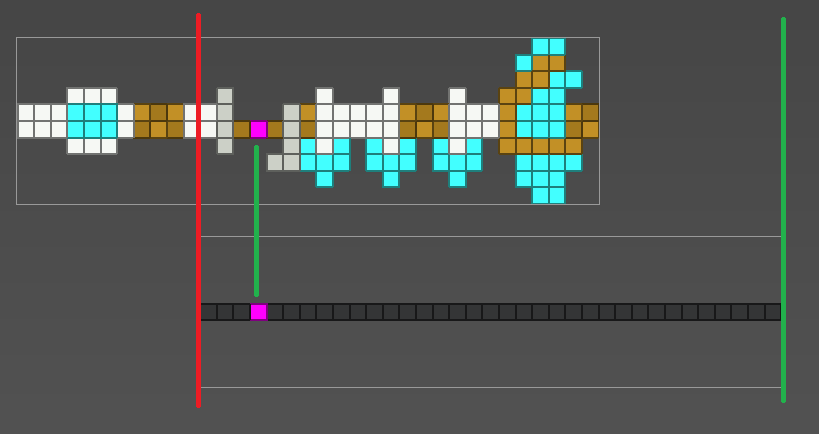 I am hoping you can manage to shift the design to the front and keep the appeal it already has.

Im changing the status of your creation to Active for now, but hoping to see it back on review!

Edit: Forgot to mention, if you are looking for Jungle colors you can find them here > https://trovesaurus.com/biome=30/jurassic-jungle/modinfo . Same works for other biomes :)

Commented on: Sword of the simple pure ice Melee creation

Commented on: Sword of the simple pure ice Melee creation

The sword could look promising but there are over 900 various melee designs in game so all the new swords that can get approved now must be unique and have some wow-factor about them.

Another very important moment, all submitted styles do need to work in game. At the moment your sword is missing an Attachment Point - pink colored voxel that tells the game where to place your model and the overall dimensions of the sword seem to be off. Please be sure to read and follow Melee Creation Guide.

I am going to change the status of your creation to Active for now, change it back to Needs Review if you upload changes. If you d rather create something completely different, set this one to Draft, that will hide it from the list and free up a creation slot. You can find guides and tips for other types of creations here: https://trovesaurus.com/creations/guides

In any case, good luck!

Cursed Halberd status has been set to Approved