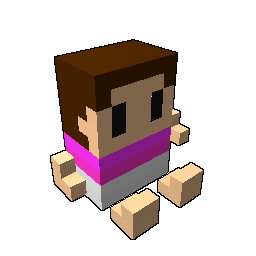 Oh G, Got the costume of this. Thank you so much Aino

Why I LOVE Trove:

1. Building - I have done a lot of builds from my freaky cornerstone, to my awesome Bastion at our club. Check out my imgur for trove build pictures, just type = imgur mhepz

2. Modding - Right now im still halway on learning to mod, but im really greatfull for lots of contribution from the community for some awesome mods. Cheers to the great modders.

Thank you Trove for a wonderful game and always make changes so that every players aven the end gamers still have something to do within the Trove World. Keep grinding guys!!!

I cannot draw so i might try to do a story:

One sunny day on the Candoria Land,

Sally (A Llama), was on her favorite hobby,

She ate candies, after that cookies, and lastly an icecream.

Sally felt something goin on her stomache,

She then hurried unto the comfort room.

And when finished, she felt OK, she said: HAYYYYYY, SUCCCEESSSS :)

Then, she was now trying to flush her you know what.

The toilet bowl broke and burst.

The "you know what" flooded into her body.

Thank you for the comment. I really appreciate it. Noted all and will do best on next. <3

Hi Digiwolf & Etaew, is this eligible for the contest or do i need to trim it down to 100 words inorder to be included?

A young boy named Tamer born during the Jurassic Period.

At the age of 5 he began to notice violence of every people on his town against the reptiles known as dinosaurs and questioning himself if it was necessary to be cruel to this animals.

At 6 years of age, he started sneaking around, wandering into the swamps, checking out different species of dino’s and watching them.

More days come, and he learned how to feed and caress them making them close to him, stay with him, and walk with him.

His Father and Mother found how he deals with these species. They beat him and never allowed to go out again.

One foggy afternoon, Monsters appeared with no warning and trying to invade and destroy the town.

Tamer, his family, and other neighbors were now surrounded by monsters.

Out of nowhere, dinosaurs arrived; this was Tamer’s friends and came to rescue. After a tremendous brawl, they successfully defeated the invaders.

After the victory, Tamer become a known hero and teaches the town people how to befriend with dinosaurs.

And they lived happily, secured, and peaceful.

UNTIL THE SHADOW TITANS ARRIVED.

If you using Windows 10, u have already a windows video capture built in. just click WINDOWS BUTTON + G, then press record. Im hoping they will add 1 more day cause of the number of contestants and im still in the office. Cant make it :(

oh.. my suggestion was executed. <3

And also fix the the Trove Livestreams Section, the picture becomes doubled.