Reduces knockback when you are hit

What are Delves?
Delves are new, endless cave dungeons filled with increasingly difficult combat, randomized monster modifiers, and exciting new items to loot! Quickly dive through these procedurally generated Delves, complete the objectives, and defeat the boss fast enough for great rewards and the ability to keep going deeper! The further you progress, the greater the challenges and the rewards! 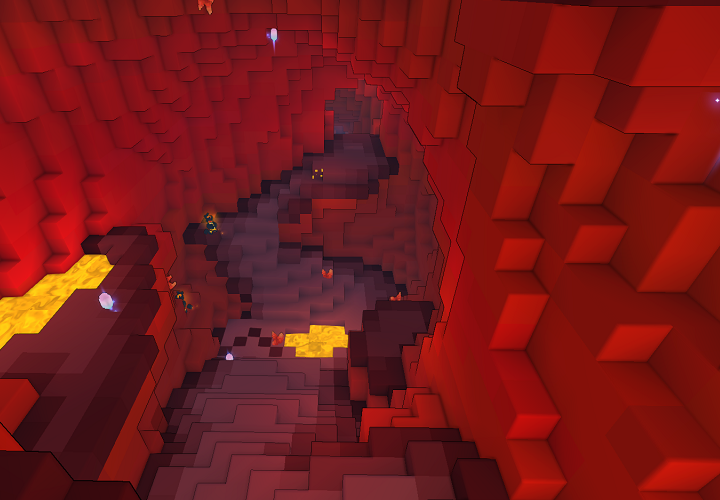 Find the Public Delves entrance in the Hub and select from a wide variety of classes, utilize your Geode equipment, and choose your flasks wisely as you battle your way to unlock incredible rewards – especially for end game content. The initial release for the Trove Delves update will be on PC only and then will release on PS4 and Xbox One consoles at a later date. 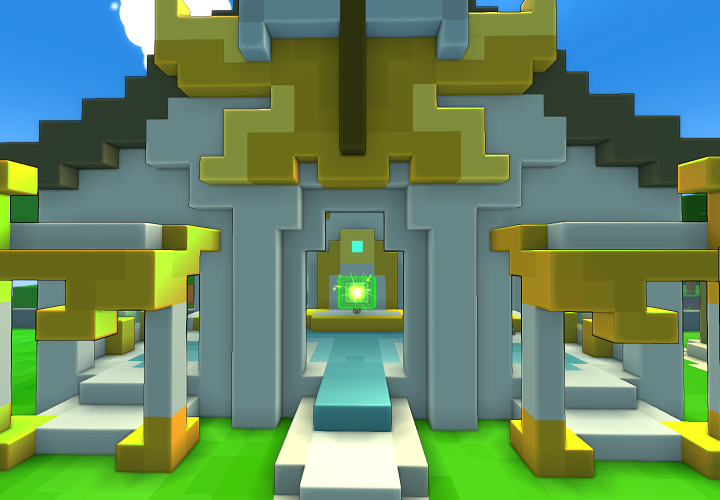 What are the types of Delves?
There are 3 types of Delves - Public Delves, Private Delves, and Challenge Delves. Delves have modifiers signified by Deltaliths, visible in the first room and in the lair room. 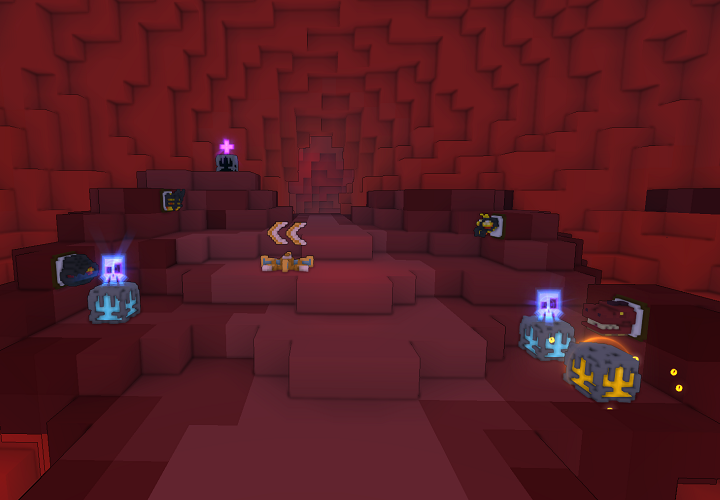 Private Delves – Delves that are limited to select players and the overall difficulty is determined by the Public Delve Score for the queued classes at the time the Delve starts. Join a Private Delve by placing a Delve Gateway (Private) in build mode and remember to be careful as anyone nearby can use it. The owner of a Delve Gateway (Private) will automatically queue when placed and can interact with it by sending messages or advancing the queue to start the Delve. Private Delves allow players to change their class at will, but they are limited to only use Delve mounts and wings. The /joinme command can be used to invite more players (up to a maximum of eight unique players in to a delve). 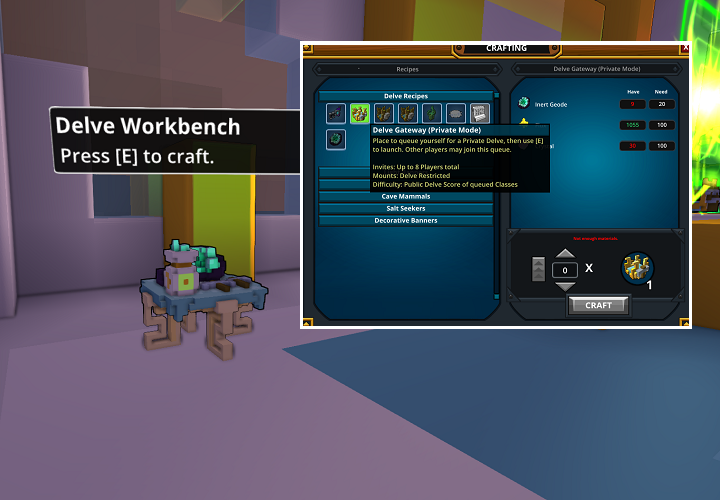 Challenge Delves –Delves that are set as a fair playing field for all delvers to compete against others and determine who can go the furthest in this specific week’s challenge. Join a “Delve Gateway (Challenge Mode)” or “Delve Gateway (Challenge Easy)” by obtaining it from the Delve Workbench. Challenge Delves pose a weekly challenge set with the same objectives, creatures, and levels for everyone for that week only. The challenge level begins at 110 each week and there are Leaderboards for the deepest depth reached and fastest time for clearing 3 consecutive tiers in a row. Challenge Delves allow players to change their class at will, but /joinme or using the friends list to join are not enabled.

How many people can be in a Delve?
Up to 8 unique players may be in a Delve and it is locked to those 8 unique players that join, this may not be changed or exceed 8 players. Delve queues focus matching players together based on the overall power and skill. If a player dies in a Delve, it will increase the time it takes to release when their next death occurs, but remember allies will always be able to resurrect others in just a few seconds! 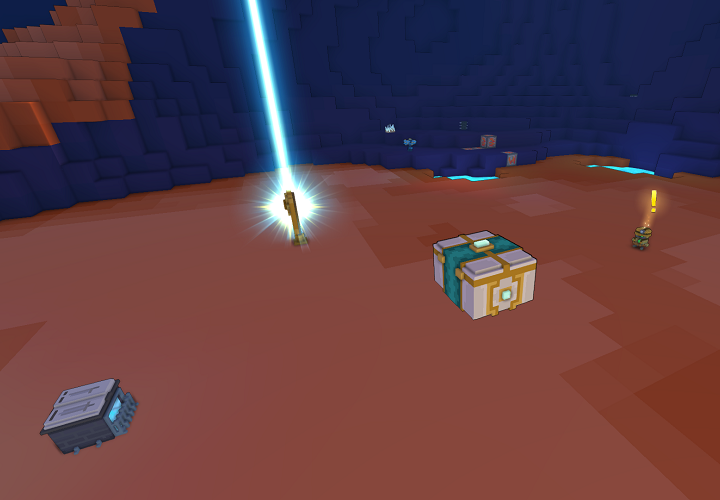 Inert Geodes – New currency type that can be acquired inside Delves. There’s a maximum amount allowed to be obtained, so be sure to use it before reaching the cap. An Inert Geode Wallet can be obtained to increase this cap as well.

Pressure-Locked Delve Caches – Caches with Delve-related items that can be purchased for Inert Geodes from a Geodian merchant trapped within Delves They can also be obtained as drops from Heavy Pressurized Chests, as a reward for donating Inert Geodes, and occasionally sold or exchanged for other Delve related goods.

Mementos – New collectible in Delves, and each Memento grants mastery based on the enemies fought within the Delve Tier. Mementos decay after 3 hours of online time if they are not learnt, but can be deconstructed in to Pressure-Locked Delve Caches.

Delve banners - New Banners can be obtained through Delves and can be crafted by combining poles, flags, and Inert Geodes at the Delve Workbench in the Hub. In addition to the Light Banners craftable at the Delve Workbench, for those with Enchanted Seasinew Torches or Enshadowed Tendril Torches, new recipes to upgrade these items can be found on the Sunseeker's Crystalforge in Geode Topside.

Delve allies – New allies can be found in appropriate biomes or crafted at the Delve Workbench.

Delve mounts – New mounts, some of which are special Shadow Tower boss themed mounts, are available to acquire.

Delve badges - New badges will be available for completion of Public, Private, and Challenge Delves.

Crystal Gear – New Crystal 4 gear is obtainable only within Delves for the most daring and expert explorers.

Shadow Towers can now open directly to the boss lair, but there is an increased cost to open the portals. The Shadow Tower Leaderboard purple name has moved to the Challenge: Deepest Depth (Weekly) Leaderboard. Shadow Towers have had Titan Soul, Lunar Soul, Binding Darkness, and Starfire Dragon Egg Fragments drops removed since they can now be obtained through Delves.

Delves provide exciting and engaging new challenges ahead while also offering the potential to improve our overall server stability by helping reduce some lag and connection issues generated from Shadow Towers. Rewards have been shifted accordingly for Delves, but Shadow Towers still remain for those looking to adventure there.

That's a bummer. We are aware of some latency and stability issues and we are working on it. On the other hand, we are happy that you have enjoyed Renewus

We resolved some of the recent connectivity and world access issues that have been affecting all Trove platforms today. Server connections should be more stable now, and we'll continue to monitor server stability across our platforms.

The forums we're also experiencing not able to load for a few hours today. The forums are back online now, thanks for your reports today on our social platforms.

Bug fixes and server stability improvements come through maintenances and other updates. Latency issues overall are being worked on. Where exactly are you getting lag and how many players are nearby at the time?

PS4 NA and PC server connections should be more stable now. We'll continue to monitor server stability across our platforms.

xXxJoose_BocksxXx, thanks for the updated report as we continue to look into server stability issues. Can you let us know which specific areas you are getting the rubber banding?

Appreciate your feedback as we typically don't give out a compensation preemptively nor do we typically do Friday maintenance. We are trying to improve overall stability or lag issues players are experiencing and this maintenance was necessary although inconvenient for some.

We thought it would be nice to give a little extra today and there's 50 Dragon Coin Boost already in the store if you or others feel like getting more. Thanks for understanding!

We are trying to improve overall stability or lag issues players are experiencing and this maintenance was necessary although inconvenient for some.

This is a known issue and Trove Team is working to fix it. There was a scheduled downtime yesterday in order to tackle some of the issues reported, but this is an ongoing process. We are working to bring more stability to our servers.

Server stability is, of course, the priority. Nevertheless, Shadow's Eve 2019 is about to be deployed across all platforms. This is a work in progress.

We are sorry for the inconvenience. We did come across some latency and connection issues. Measures were taken in order to tackle these issues but this is an ongoing process. Trove Team is working to improve the stability of our servers.

PC is back online!

We'll continue to monitor server stability and reports on connectivity, thanks for playing!

PC is back online!

We'll continue to monitor server stability and reports on connectivity, thanks for playing!

Trove experienced some issues on PC/NA after the last scheduled maintenance. The server stability was in the meantime recovered. We are sorry for the inconvenience.

We are working on and aware of some of the log in issues that came up recently connecting to PS4 NA. Thanks for your reports, we will let you know when we have updates and server stability has improved.