The New Shadow Tower has been released and it was slightly confusing for me so here I have compiled the Shadow Tower into something more understandable.

(This is also my first guide on Trovesaurus so i do not know how to directly link items and such, sorry for that :P) The Basics of how to start the Shadow Arena and what you should expect can be HERE.

Still, for those of you too lazy to click on a link, I'll explain a slight bit about it too.

You will have to craft Where is it? to open and you should see the UI that looks like the picture at the top.

There are 2 modes, Hard and Normal.

After opening the portal,

You (and others that you might invite) Will have to complete

which would be followed up by the Titan that you chose to fight at the Shadow Tower Portal.

The first of the Titans is the Spike Walker

Things to note about the Spike Walker,

-He leaves Spikes wherever he goes

-(I'm not sure about this one, I might have been hallucinating) His Spikes cannot be destroyed except if he attacks the same spot over, multiple times with a certain attack which i do not remember

-When he starts curling up either spam your jump button or run away fast! Tip: use your dodge/roll move which helps you get out of the giant hitbox of damage and knockback [default:shift]

-He spawns minions in 4s

-He rolls around the room, damaging and escaping at the same time, but im not sure if he leaves spikes around where he rolls

The Second Titan is the Weeping Prophet

Things to note about the Weeping Prophet,

-if you are melee-ing him, his health can be a bit tricky to see but all you need to do is jump like once

-Starts off by sweeping his arms to deal damage

-He eventually will start to spawn eye minions which are ranged monsters and in hard mode, will be very annoying(at least for me)

- Around less than half health he is able to spawn larger versions of eyes which doesn't move but acts very much like an attack. These large eyes will drop and shoot lazerbeams and move the beams around slowly The Third Titan is the Vengeful Pinata God

Things to note about the Vengeful Pinata God,

-He only has 3 moves

-His third move is the most irritating move ever, the spawning-pinata-minion move. He summons sets of pinata minions to attack you and your friends but these minions are seperated by types there are 3 melee minions types (summer, autumn and spring) and 2 ranged minions (winter and shadow). These minions are annoying and can overwhelm your party if they grow too much in number.

-Again Tomb Raiser would be a nice to have just so to distract the enemy minions and with each minion defeated the TR can summon one of his own. 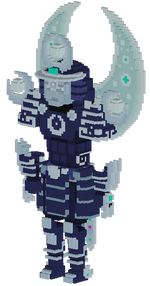 Last but not least, we have the Daughter of the Moon.

Things to note about this tanky AF Titan , Daughter of the Moon (DotM),

-Firstly, She starts off with her swords. She obviously attacks with it and slashes you in combos but she has a special attack where she looks as if she's charging and she then launches players infront of her. Just dodge these attacks and try your best to lower her health while avoiding her attacks

-After around a quarter of her health is gone she discards her sword and starts using guns.  She just rapid fires in a cone infronts of her until, again, she charges up her gun and you REALLY want to avoid cause it hurts...alot

-Half healh and you've used around 6 pots, good right? You'ved saved more than you thought you could initially and you have more pots if anything else happens! Wrong. She throws her gun away and it turns to a freaking turret that hurts and annoys (which pretty much stays the entire tme).

-Thats nothing much to what the DotM can do now though. You look back to the Titan and you see her holding up her charged sword again. Boom! You're dead.. Her charged sword literally 1-Shots anything and everything to where she aims.The Death-Defying Vial won't work for this shot and you will suffer a quick death. If i said that the guns hurt, this one kills.. like no kidding.. Dodge it... just please dodge it! Do note that she still is able to use the skills from when she first started.

-A Quater health left! The Daughter of the moon Reveals her true form, she disards her sword and mercy. Good news and bad news, good news is she can't one shot you anymore, bad news is that she now shoot lazerbeams, Create Poison Fumes that come from the ground and Giant Crescent Boomerangs....

-The lazerbeam can go 2-way and 1-way and aim at you, pretty easy to avoid if you have enough jumps but not exactly if you have everything else she has planned out for you waiting to damage you

-The Poison Fumes lay on the ground like random spots of lava in the battlefield but hurts more.... and its pretty much worse in every single way

- The Boomerangs Could also act like Melee Turrets that spin and hurt which she spawns on the ground but she also throws them from her back at you.

-Your priority is to Survive and hit as much as you can without taking hits, but the jumps stops your energy from regen-ing and her attack spams like crazy. Dodge, Dodge, Dodge and Dodge. Also remember to Do(d)ge.

-Class For the win: Fae Trickster because you have a teleport ability which leaves a decoy, a aoe bomb to go along with your hard and rapid hits from your passtive(x3 damage for your basic attacks if not damage within the last 3 seconds), with your ult to go alongside. I've heard of a 8 Fae trickster team going in and actually doing well so go for it and slay this daughter of a ^^^^^

A solo guide for DotM by Bahamuth. [HERE]

-Crowd Control Does not affect Titans so Ice Sage loses its main purpose... And shadow hunter and Boomerangers' stun is quite useless too

Thats all I have for now and I hope that it has been useful. Please drop a comment if you have any questions and I will answer it to the best of my ability. If I did messed up or missed anything please also hint it out for me. Hope you all can now slay the Titans' better and I thank you all for reading!

PS: If you have a rather good guide for the Shadow Tower that covers more in detail or in a different way then also drop the link in the comments^^