Everything You Need to Know About Tomb Raiser 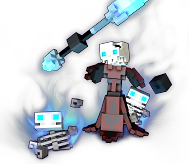 "The unlife of the party! Animate minions, then heal them and damage enemies with your basic attack's piercing beam. Enhance your attack and defence with Banshee's Boon, and combine your Bonetourage into a Grave Goliath!" - In-Game Description

So if you're reading this it's because you want to learn about Tomb Raiser, improve with him or something else. First, we'll give information on his abilities, equipment stats, allies, flasks, emblems Tomb Raiser should have and then how you should play him.

As a side note: Everything here is tested, unless specified "Throw a restless soul, consuming it and spawning a skeletal minion where it lands. Minions will fight for you for a short while."

"Turns the user into a ghost. While in ghost form you take 90% less damage, and your primary attack affects all enemies and minions around you. Ghost form rapidly depletes your energy and ends when energy reaches zero."

Second and fourth stat has no use for attack speed so take health regeneration and movement speed. % Maximum Health and jump are the only stats useful combat wise in the third slot, but we don't need too much jump so take % Maximum Health

Energy regen helps alot to heal the minions, deal more damage and survive longer. You can take jump over health regen if you feel you need more jump since you already can lifesteal alot from Banshee's Boon.

Once again, attack speed has no use for Tomb Raiser so health regeneration and movement speed to second and fourth slot. Magic damage to deal more damage since your minions tank it all and faster clears.

Good ally for those starting with Tomb Raiser

Honestly, skilled players would negate the damage bosses do with Banshee's Boon, lifesteal back up and let them aggro on minions, don't really need this

Best flask to make full use of emblems. If you are going to use them for health, use other flasks like the "Balanced Elysian Flask" or "Elysian Jug"

10 secs is a pretty long duration, but Banshee's Boon duration stops energy regeneration so use a flask after using Banshee's Boon to maximize the emblem's use.

Doubles the magic damage of the user, minions and Grave Goliath.

Great for keeping yourself in Banshee's Boon mode to survive longer, do more damage and heal minions faster. Always take this since it can be both used offensively and defensively.

Usually, you would do this for every fight, except on some boss modifications and specific monsters

Also, if there are monsters annoying you when entering a lair or dungeon, you can throw a minion to distract them or use Banshee's Boon.

Bosses, their Modifications and Tomb Raiser:

Poisonous clouds, lasers, fire, thorns bosses has a high attack rate against your minions and destroys them easily. So, we have to change the playstyle to beat them.

Only when you don't do signifcant damage or can't survive healing minions with the basic attack. Basically, the minions and Grave Goliath will act as a distraction and tank.