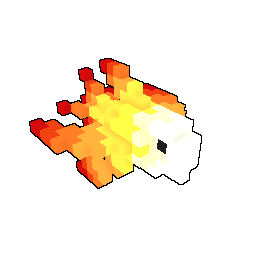 This is a guide to obtain all rare fishes in Trove.

As some of you may already know, fishing is the quickest way to obtain glim in-game. Sure, you can stay in the hub and fish all day and get tons of hub-huggers, but wouldn't that be boring? This guide would supply you with the know-how to get all the currently available rare fishes.

This guide will be divided into 5 sections: Water, Lava, Chocolate, Enchanted and Plasma(which is currently unreleased).

/*This guide is entirely based on my personal opinion and I have arranged them according to skill level (Sort of). Therefore, you do not have to do what the guide says word for word.*/

To start off, you're going to need a lot of

Glim. If you have just started out, visit the novice world, get on your mount, step on the grass in the area that you spawn in until you have accumulated at least 300 glim. (Yes, grass drop glims. Don't ask me why.) Once you have enough, hold "H" to go to the hub.

In the hub, turn to your 5 o'clock from the direction you spawned in, and you shall be looking at a weird little hub with a parrot in it. Go up to the parrot, press "E", and you will be presented with a shop menu.

With the glim that you have collected, purchase a fishing rod and 10 lures. Next, step up to the pool of water beside the hut, face the water, and press "F". After a thousand years (~30s), the lure would start bobbing up and down and your character would go into a spasming fit. Press "F" again to collect the fish. Do note that the lure is used immediately upon casting, and that you have approximately 4 seconds to reel in the fish before it disappears along with your lure.

You may catch one of the following: A common fish, an uncommon fish, a rare fish, an exceedingly rare fishing rod, or an old boot. As you can probably tell, the rare fishes are what you want to collect, and the boots are what you want to throw away. As for the fishing rod, it is a cosmetic item named the "Wish Fisher" and is worth 5-10 thousand flux. A pretty good catch indeed!

Once you have used up your 10 lures, walk up to your Loot Collector (a.k.a deconstructor) and place all of your fishes into the machine to turn them into glim and rare materials. With the glim collected, buy more lures and repeat the process.

For the hub area, you are looking for a fish named the Hub-Hugger. Once you have caught it, you may move on to the next fish, the noobfish.

For the Ancient Seafish, it is an "Ancient Fish", meaning you can catch anywhere that does not have a specific rare fish. For simplicity sake, we're gonna catch it in treasure isles (Indicated on the map by ship's wheel), where there are plenty of water.

For the Dry Bones, we'll have to catch it in the Desert Frontier (Indicated by cacti). Look around the area for a pool of water you can fish from.

For the Gloam Fish, you can catch it from the Cursed Vale (Indicated by a skull). There should be plenty of water to fish it up from.

For the Weird Fisheye, I would recommend leaving it till later, but if you have a high enough character level feel free to catch it. It can be found in a very specific Shadow Arena with water in the final chamber. An easy way to find these SAs will be to join the SA chat by typing "/join sa" in chat and asking to join the SA from there.

Once you have caught the above mentioned fishes (excluding the last 3), you will have enough ancient scales to make a lava fishing rod. The required materials are: 3 ancient scales, 50 primordial flames and 100 shapestones. Once you have the required materials, return to the hub and go to the fishing shop. At the front of the shop there are 2 crafting stations, when interacted they will being up a crafting menu in which you can craft your fishing poles. Craft the Molten Magmar Sifter, learn it, and move on to the next section.

For the Charred Hub-Hugger, you'll have to catch it in the hub. You should see a dragon statue opposite of the fishing shop with stairs leading down. Go down and you should see lava from where you can fish it up from.

For the Flamroasted Noobfish, you'll need to return to tutorial world. There is actually a pool of lava that you might have missed entirely during your tutorial. Once you have spawned in the tutorial world, stick to the left and keep moving forward. You should be able to see a lava-fall. Jump up to where the pool of lava is and fish it up from there.

For the Ancient Lavarider, it is another Ancient Fish. I suggest visiting dragonfire peaks (Indicated by jagged mountains) where lava is aplenty.

For the Frigid Firefish, you'll have to search around the permafrost (indicated by snowflakes) dungeons for one that has lava in it. This might take some time, but don't give up! Once you have found one, you can fish it up from there.

For the Tropical Volcanofish, you'll have to find a source of lava in the treasure isles(ship's wheel). I have noticed some big dungeons in the shape of islands do contain lava on the surface. You'll have to search around for this one too. Fish it up from the lava.

For the Soaring Flamefish, you'll be required to visit the skyrealm again. If you have yet to catch the Dawn and Moon fishes, now will be a good time to get them. For the flamefish, you'll have to look around for a specific "Darkheart" Dungeon where there is lava cascading down the middle. This will also take some searching for and you can fish it up once you find it. Do note that you'll have to fish in the lavafall itself, so do aim your lure carefully. (Update: There is another dungeon where you can fish it up from. There's one with a little pool of lava right beside the Darkheart.)   Once you've caught it, move on to craft your chocolate rod.

To craft the Candied Fishing Cane, you need 5 ancient scales, 50 shapestone, 100 cupcakes. You might need to farm a lot of cupcakes from candoria(Indicated by Candy Canes).  While you're there, farm 30 more cupcakes. With the cupcakes, go to your cube converter and make a cocoa cascade block which costs 30 cupcakes and 100 formicite ore. Learn the rod and craft the block.

First of all, you'll want to type this in the chat: "/debugtext" (No quotes). This shows your fps, ping and location on the top left hand corner. This will be very useful for fishing later on.

The first fish you're going to catch is the Chocodile. Return to candoria and just fish from any source of chocolate, but be sure you are between 20 to 200 in height. (The 2nd number in your location.)

Next, for the Ancient Chocolurker (Ancient Fish), you're going to need to claim a cornerstone and plonk down your cocoa cascade block. I recommend just going to hub and claiming one of the many cornerstones available there. If the height is between 20 and 200, you'll be able to fish the chocolurker up.

For the Popular Poptopus, you'll have to join a club. I suggest asking around in the global chat for a club to join or making your own club, which is pretty cheap as well. Once you're in a clubworld, place your cocoa cascade down between the heights 20 and 200 and fish it up.

For the Pressurised Gobfish, you'll have to fish it up at heights below 20. I recommend finding a pool of chocolate in Candoria, and then digging straight down till you reach a height of about 10. Then dig around you to make a small room to fish in.

For the Pink and Blue Highflying Candishes, you'll have to fish them up at heights exceeding 200. Return to your cornerstone and keep placing blocks below you until you have exceeded 200 in height. Then, place the cocoa cascade block down and fish them up. Mind you, it is going to be a pain in the arse sometimes to get both of them, as it is completely random which one you are going to get. I got 10 blues before finally getting a pink. After you have caught these 2, it is time to craft the lady of the lake rod.

The Lady of the Lake rod costs 5 ancient scales, 50 infinium and 500 flux to make. You will also need to craft a face of flow block from the cube converter requiring 75 glacial shards and 100 formicite ore. Once you have done so, learn and equip the rod and you may now move on to the enchanted fishes!

The first enchanted fish you are going to catch is the Frog Prince. You can catch it anywhere in the fae wilds (Indicated by a butterfly) that has a water source.

For the Phoenix Fish, you'll have to find a dragonfire peaks (Jagged Mountains) area that is right beside the sea, a.k.a treasure isles. Find an area that puts you at the water's edge but still inside the dragonfire peaks area. You should be able to fish it up.

For the Witchly Anemone, you'll have to catch it in the Cursed Vale (Skulls) between the heights 20 and 200.

For the Gryphish, you'll have to fish at heights exceeding 200. I recommend going back up to where you fished for the highflying fishes and replace the cocoa cascade block with a face of flow block. You should be able to fish it up.

Finally, for the last fish that is currently available, the Deep Sea Merthing, you'll have to fish it up from heights below 20. A simple way to do so would be do dig down in the waters surrounding the hub till you reach about 10, and then digging a small room for yourself to fish in.

Aaaaand that's it! You have caught all the fishes, for now at least. As we wait for the release of Plasma fishing, you may now want to go back to the beginning and start fishing for all the trophies. But is it really worth it? All these hours of catching old boots might've been better spent on doing other things, like completing Shadow Arenas...

Do drop a comment if you have anything to ask or have any suggestions for me to further improve the guide.

(Check out my other guide on forging: http://www.trovesaurus.com/page=723/trove-forging-guide-for-dummies-complete)

Um since they got rid of SA's where is the Wierd Fisheye now?

There is still shadow towers that have normal water in them. Check through the rotations and you should be able to find one that has it.