This is a example of a play style for the Neon Ninja that is very successful at Uber 5 and Shadow Arenas with a reasonable degree of practice. It is based on the examples given by a few members of the community, primarily Psychobeans and BrianVI. 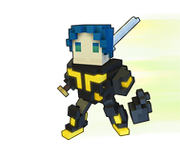 Unlike other Melee classes in Trove the Neon Ninja is what is considered a Glass Cannon. It can deal out a solid flow of damage while providing extremely high mobility, with the drawback of not being able to face tank large groups of high level mobs as easily as a Candy Barbarian could for example.

What the Neon Ninja has on it's side is the ability to avoid damage by using a combination of an 90 degree turn and a Shadow Flip immediately after. This done in succession after three basic attacks allows you to acquire a fully charged set of three shurikens. Using the above technique you have two ways to fight. The first way if you enjoy many back flips or have SA party members who dislike your Stasis Field is to use a method of Dashing up to a mob, Basic attacking 3 times to get three rings to fully charge your Shining Star. Back flip at a 90 degree angle then fire shurikens. Repeat this by dashing up to the mobs again and repeating the process.

The alternate method uses the Stasis Blade. You Stasis the mobs, basic attack until you have three rings, back flip and then fire shurikens. At this moment you start over and Stasis the mobs again, and repeat the rest of the steps.

By using either of these pairing of moves in this order you are able to deal significant amounts of damage while allowing yourself the possibility of avoiding all incoming damage. Keep in mind that in close quarters pulling this off takes low ping and a very high skill level.

Due to a recent patch the distance after a back flip is usually close enough to be able to quickly place basic attacks. When this is not the case you have another option of using your dash after your back flip to move closer to your target.

To pull of this with a Neon Ninja in a U5 SA you need max level gear with:

Energy Regen on 1 piece
Health Regen on at least 3 pieces
HP % on 2 pieces
Attack speed on 2 pieces
Physical damage and jump on the ring works, with Energy Regen on your sword. Or they can be swapped.
After that, you want Health everywhere you can place it. For your ally usually Samantha is recommended.

For flasks Restorative Emblem and Unyielding Emblem applied to a Death-Defying Vial is the safest, as you should already have enough Energy Regen from one piece of gear. In areas where death is not as high of an issue, swapping the Emblems to either Martial or Shadow Shrike is possible to speed things up.