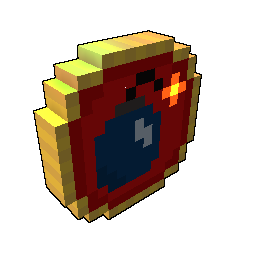 The Bomber Royale of the PVP game is a new mode added in the GEODE update of Trove, here is a guide to help succeed and make a lot of TOP # 1 and get all the rewards that can be acquired to the merchant (english traduction from my original language)

As I told you, the Bomber Royale mode is a new mode added during the GEODE update and replacing the PVP portal of the home world, you will be able to access it with the portal of PVP of the hub or directly via GEODE world

In this player mode against players, you have access to a giant cube containing all players and wait for 20 players to start the game that is insufficient, the game anyway

You can also find merchant

offering many awards in exchange for bomber royale coin

Here are some tips for winning and often doing TOP # 1 in Bomber Royale mode:

When you start playing, you have the opportunity to take boosters, you can give extra abilities:

When your enemy is below, she bounces very high and then will not wait for him

Basic skill of the player, significantly reduces the time of reloading when you amass it, inflicting no damage, it allows you to move quickly and reach heights

-Catapult bomb :secondary skill acquired in love the booster, decreased cooldown when you are alive, inflicts average means 10,000), propels high up in the air, repels nearby players

-At the beginning of the game:

-Try to search for the maximum of boosters (care, bomb, bomb sticky) and seek to face only if you have a good level to get the bonus of the first block (+1 shield of Bomber Royale)

- To kill your oppenents :

1-Throw him the maximum of rubber bomb that you can, to aim well, (it bounces 1 time until exploding)

2-Move closer to him and use the bomb catapult, when you're in the air and throw him your sticky bomb

3- Continue on and repeat the pattern until he dies

When an enemy dies, it offers all boosters and Instant healing bonuses

- To be able to survive:

-If you fall into the void early in the game, get close to a nearby water source

In the lava if there is no more water (Very risky)

-On the end of the game, the map is reduced and you will have less room to circulate so find the highest platform and destroy your opponents with the sticky bomb 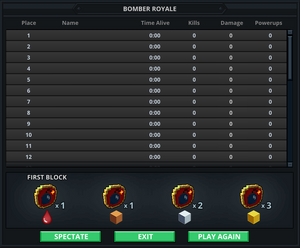 By following this guide, it will take you about 5 days to get 300 Bomber Royale coins and u can buy now all the fabulous buyable rewards!

Getting to 20 Trove Mastery as Fast as Possible