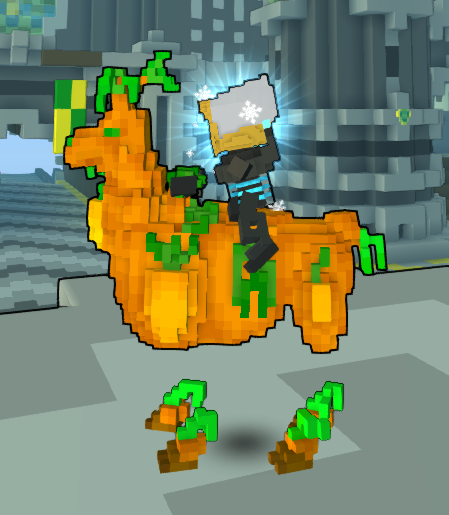 In this spotlight we chat with Trove Modder - Pendk about his approach to modding.

Well, I can start by telling you my name which is pen, I started playing trove in July 2015 and began modding in July 2016, you may know me from creating the really orange lama also called llarrot, I have also created other stuff, but I think most people know me for that, also I am in college atm.

Where does you name come from?

My name comes from a trove streamer that sadly don’t stream anymore, since my twitch name is a bit weird, he thought that pen sounded better and I agreed, so to this date I am called pen pretty much everywhere.

Outside of Trove, do you have any other experience with modding or art?

I don’t really have any other experiences modding besides trove.

What really inspired me into modding was watching Screamheart on twitch, after I saw him make a mod, I think it was the Infineon dragon, I was intrigued, so I looked on the forums to see if there was any tutorials on how you mod, there was but it seemed hard, I did read it more than one time but I just forgot about it sometime after, until a day in July 2016 in the trovesaurus discord, I saw that some people was talking about making mods so I asked about how you start and banana aka bananaboms learned me it, I am very grateful for him learned me it.

Which models work inspires you the most?

A lot of modders work inspirers me, when Screamheart made the Infineon dragon and the wings he has made, Teekaym’s mods are also really inspiring to me, I love the dark rider he made and the f4st rocket mount he made, Dusty’s reboot costume is amazing and inspirers me as well, a lot of Friedsushi’s mods are inspiring, Aviarei tapestry dragon is amazing, skyriders dragons are just beautiful, Zoe’s mods I really also like, Milambit’s mods are fantastic, Lippylapras dragon tigers are amazing, Mew2ian’s amazing mods and so many more that this would take up a lot more space. What mods have you made so far?

Well I have made: a cookie log, the wings of festivity, a radiant centaur, the neon zppl1n, a Saurus-dragon and of cause the llarrot.

What is the most popular mod you have made?

I think that goes to llarrot, it even made it to the trove’s website front-page, when the tmod format was introduced.

What are you most proud of making?

No doubt, that goes to the llarrot, I loved making it, and I think the community liked it, since it was something that was really weird.

What do you use for the design process or what steps to make a mod?

Well, my design process is weird, I don’t really have one, but I just make what I can see as soon as I get the idea, I normally start with an idea and I begin to work on it in a voxel editor, after some time, I tend to know where I want to things to be and how I want them to look like.

What tools do you use to make mods and why?

Right now I am using qubicle and popcornfx, I did use magicavoxel before but switched to qubicle, my reasons for those programs are that qubicle is fast, easy to work with and you can get more qb’s into the program at the same time, so it goes much faster instead of having to drag a different qb in every time and for popcornfx, well I use this if I want to edit the vfx of things like footsteps or wings, it can be hard, but when you get it to know you can create so much different vfx and really nice looking wings.

How long did it take you to learn the program you use?

Well, it didn’t really take me that long to use magicavoxel, must have been 2-3 weeks, after that I knew where things and shortcuts was so it made it much easier, qubicle was the same for me, it took about 2-3 weeks and I knew what I needed to do things fast and quick, the story is different with popcornfx, since it has a lot of advanced things that you can mess with, I am still not the best with it so still learning but it goes better every time I use it.

What is the most challenging thing about making mods for you?

Must be how to get the shading looking right, when I started making llarrot I didn’t think of shading at all, but when people told me that shading is a good thing to have I started trying it, but I was still bad at it, but luckily a friend helped me with the shading and it turned out great, I still am not the best but it goes better every time I do it. What advice can you give to new people wanting to mod?

If you have an idea you think is amazing and awesome, do it, don’t wait and don’t be afraid to ask modders on how to start modding, we all started at the same place, where we didn’t know how to mod.

How do you see the modding community right now?

Right now I see the modding community is going strong, there was a point in time some months ago that the community is slow, but it seems like now that a lot more people is making mods and many of the new modders are getting mods accepted, which is really great.

What would you change in the modding community if you could?

Besides some of the community only comments on mods for codes I don’t have anything to change, why do I think this, well there are some great mods out there that don’t get comments because they don’t make a supporter list and many people only comment for a code, which is wrong, real feedback is much better, instead of just this looks nice, else then that I think the community is great.

Have you had any experience uploading your mods to steam workshop, and what do you think of the process?

Yes, I have, well the process is a bit difficult, I think but it works ok, I don’t really like the fact that the comment you need to write is so long, I don’t personally use it that much but it works as it should.

What has your experience been using the new tmod format over the old one?

Well, my experience is good, I like it on some fronts and I don’t like it on another thing, let’s begin with the things I like: I like that it is one file and it is easier to install for those people who don’t use a mod loader. The thing that I don’t like is that if you need to drag all the files over to the steam version of the game else it won’t work, since I play using glyph and not steam this is more time-consuming for me, else it is good.

What improvements could be made by developers, or mod distributors (trovesaurus/steam)?

I really don’t know at the moment what could be done better, I think if it became a bit more user-friendly it would be good, else nothing that can think about.

Other than the mods you've created, can you list a few of your favorite mods?

A few is hard, but I can try, these are some favorite mods: Dark Infineon dragon, Pinata dragon, Guardian angel costume, Reboot costume, dub-o-macer costume, G.R.Y.P.H 3000 , guardian golem, the construction bobcat that Dusty and Milambit made, Digiwolf’s Direwolf and so many more.

Wonderful article Digi.  Pen...  awesome and revealing answers to your take about modding.  I especially like your encouragement to others to give it a go!

I am looking forward to more of yours, and many other Trovians creations in modding, building, etc.  We are going places in this great little community called TROVE + Trovesaurus.

Nice capture Wolfie,  I'm looking forward to the next edition.  And Pennie bee, Llarrot \o/,  you deliver nice works,  keep up the spirit.