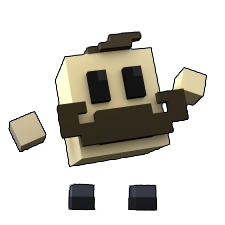 Welcome to the Mantle of Power. Trove's first expansion!

This is the biggest single update we've ever made to Trove and we are immensely excited to be able to share our hard work with you guys.

To help you understand some of why we're making these changes I'm going to add additional context throughout the patch notes to help explain our thought process.

Thanks for playing Trove - and see you tomorrow for the Mantle of Power!

These equipment changes are all about game feel. Pearls have been too easy to get for how good they are for a long time. Any time we put a commodity like this in the store or in-game for a flat cost the natural fluctuations of the market always make our best efforts quickly become out of date. We opted to remove it both from the in-game and rmt stores and let the market price these. All players will receive them slowly and at the same rate, and it's up to them what they want to do with it.

The forging change gives stronger meaning to rarity, which goes along with gems in teaching new players what 'stars' and 'rarity' means for equipment. Functionally we expect the gameplay impact to be little to none, barring a little more farming needed to push into the end game as you acquire your first shadow equipment.
Equipment
Shadow Tower
Marketplace
Dungeons & Biomes
Terraforming
Improved terraformers. When using a terraformer, you now pick the zone you want to terraform at the map screen, and then are given a flyover preview of that area and a timer before the terraforming happens. Honestly this should probably have been the very first thing in the patch notes.

Shmeeps
Shmeeps are awesome new community created mounts! The basic Shmeep drops from Uber-8 worlds and above and can be used to craft a variety of Shmeeps at the Adventurer's Crafting Bench! Well done, FriedSushi, CrabbyMatti, Milambit, synsixx, and Taux!

Centaurs
Regular Centaurs now drop from Uber-9 worlds and can be used to craft a variety of new, community-created centaurs at the Adventurer's Crafting Bench! High fives to Zoe, Jobot343, and Mew2ian!

Other Languages
Far more strings are available to be localized than ever before!

Class changes can be tough to make, and we tried to do the biggest ones at the same time we were making other balance changes. I expect we'll continue to make adjustments in the weeks ahead as this goes live and we get a wider audience giving us feedback.

Overall our goal was to do two things: bring all classes more in-line in terms of baseline survivability and dps. You can choose to spec more one way or the other (and many classes reward it), but you'll need to intentionally build your equipment for it more now.

The Revenant deserves a special mention here as the class with the most fundamental changes. It was already incredibly good and now it is still quite probably the best, but now it's a bit more of a competition and will need to work harder in terms of acquiring the right stats for the job.

The other balance change that will be controversial but was important is the change to the emblems. I think firstly it's important to call out that they will probably still be the most commonly used emblems, but we hope that this encourages people to mix it up. Surestrike was the worst offender since it basically invalidated a complete stat (critical hit), taking what could be the cornerstone (no pun intended) of an incredible dps build and making it useless. This change helps bolster a crit build without making one of the stats a non-issue. The other damage increasing emblems were just too easy to use effectively (and basically always). Now they have been tuned to more correctly fill a role as a burst dps emblem and not a requirement for any time you are doing damage.

Finally, note the attack speed increase is based on animations. Most classes went up to 300, but the Lunar Lancer already has a fast animation and has been locked at a lower number as a result.
Class & Combat Adjustments
Ranged Attacks
The basic ranged attacks for Boomeranger, Shadow Hunter, Chloromancer, Ice Sage, Gunslinger, and Fae Trickster now deal AoE damage in a very small radius, this should make fighting multiple enemies slightly easier for these classes.

Attack Speed
Emblems
Health
Changed Hit Point multipliers from Multiplicative to Additive. With the addition of gems, health was ballooning to extreme heights, and this change addresses that to protect the long term health of the game. This affects the following classes: Knight, Boomeranger, Candy Barbarian, Dracolyte, Pirate Captain, Revenant and Tomb Raiser. Until you've equipped some gems, these classes will see a decrease in their total health.

Additionally, a number of classes have received adjustments to bring older classes more in line with newer classes.

This page was created automatically from http://forums.trovegame.com/showthread.php?96089-Patch-Mantle-of-Power-Head-Start-Edition-4-19-2016